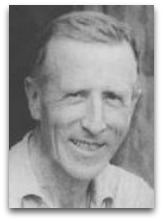 In existographies, Pierre Teilhard (1881-1955) (IQ:180|#121) (Gottlieb 1000:809) [CR:153] was a French scientific-religious philosopher noted for his religious thermodynamics views on energy, consciousness, irreversibility, thermodynamics, the direction of evolution, and the conception of a person as a “human molecule”, which he considered as an evolved structure of atoms, as captured in his 1938 The Phenomenon of Man, and other post-humorously published works.

His general theory or objective, being biased by presupposed a religious mandate in the structure of the universe, was to draw up the main lines of a “spiritual energetics” that he defined as “psychodynamics, on the analogy of thermodynamics” or a “motor force in the universe”, devoted to the study of "the conditions under which the human zest for auto-evolution and ultra-evolution occurs in relationship to dissipation". [1]

Overview
Teilhard, being a Jesuit priest and paleontologist, who studied chemistry, physics, botany, and zoology and received his doctorate in geology, was conflicted by the contrast between the teachings of the religious scriptures and that of science. To remedy this, in his private writings, written between 1916 and 1955, published only post-humorously, Teilhard sought his own philosophy, an élan vital type of atomic spirituality in which the direction of evolution was towards the formation of higher mental spheres, e.g. the noosphere, from atom to man and beyond, as in the omega point. His writings, being against Catholic doctrine, were generally banned by the church after 1925.

Free energy
In the decade when Teilhard was in his peak, in regards to theory development, i.e. with the publication of his The Phenomenon of Man (1938), the Gibbs free energy interpretation of freely-running isothermal isobaric natural phenomenon, was just being introduced to the world, via Gilbert Lewis (1923) and Edward Guggenheim (1933); hence, it would seem likely that Teilhard as not thinking directly in terms of Gibbs-based logic in his time. The modern connections, however, can be discerned. Shown adjacent, e.g., is American biophysicist Harold Morowitz’s 2002 take on the connections between Teilhard’s 1936 theories and Gibbs free energy. [7]

Education
When he was 11, he went to the Jesuit college of Mongré, in Villefranche-sur-Saône, where he completed baccalaureates of philosophy and mathematics. From 1905 to 1908, he taught physics and chemistry in Cairo, Egypt, at the Jesuit College of the Holy Family. Teilhard studied theology in Hastings, in Sussex (United Kingdom), from 1908 to 1912. There he synthesized his scientific, philosophical and theological knowledge in the light of evolution. Teilhard was ordained a priest on August 24, 1911, aged 30.

From 1912 to 1914, Teilhard worked in the paleontology laboratory of the Musée National d'Histoire Naturelle, in Paris, studying the mammals of the middle Tertiary sector. Later he studied elsewhere in Europe. Professor Marcellin Boulle, specialist in Neanderthal studies, gradually guided him towards human paleontology.

Between 1914 and 1918, Teilhard served in World War I as a stretcher-bearer in the 8th regiment Moroccan riflemen. In these years of war, he developed his reflections in his diaries and in letters to his cousin, Marguerite Teillard-Chambon, who later edited them into a book: Genèse d'une pensée (Genesis of a thought). He confessed later: "...the war was a meeting ... with the Absolute." In 1916, he wrote his first essay: La Vie Cosmique (Cosmic life), where his scientific and philosophical thought were revealed.

Following the war, at the University of Paris, Teilhard completed three unit degrees of natural science: geology, botany, and zoology. His thesis treated of the mammals of the French lower Eocene and their stratigraphy. After 1920, he lectured in geology at the Catholic Institute of Paris, and then became an assistant professor after being granted a science Doctorate in 1922.

Seed of theory
His reading of the 1907 book L'Évolution Créatrice (Creative Evolution) by French philosopher Henri Bergson was, he said, the "catalyst of a fire which devoured already its heart and its spirit." Bergson’s book provides an alternate explanation for Darwin's mechanism of evolution, suggesting that evolution is motivated by an élan vital, a "vital impetus" that can also be understood as humanity's natural creative impulse.

Teilhard, a physical chemist and a priest, the epitome of a mind rankled with two competing belief systems, served the basis of the character of Father Merrin, in the best seller 1971 book The Exorcist (and followup 1973 film); and parts of the plot were themed on Teilhard’s theory of evil (or the existence of Satan) in the world possibly being Lucifer [or matter-energy spirit] working out his [or its] salvation through the process of physical evolution ending in Teilhard’s omega point theory. The following opening quote from the book version of The Exorcist is said to capture the theoretical aspects of Blatty’s mindset: [5]

"Matter is Lucifer crawling itself back to God"

(Matter [is] Lucifer upward groping back to his God)

This means, supposedly, that matter (humans being an evolved incarnation of matter) must work its way through the permutations of entropy, chaos, and generally things that make humanity unhappy in order to know about good and evil. The following is a quote from Blatty (about the novel Legion) which explain his theory: [6]

'In the novel, the coda was needed to put a button on what the novel was all about -- Kinderman's rescue of God's goodness via his theory of "The Angel," which hypothesized that the fall of man was premundane; that before the Big Bang, mankind was a single angelic being who fell from grace and was given his transformation into the material universe as a means of salvation wherein his legion of fragmented personalities would spiritually evolve ("Can there be a moral act without at least the possibility of pain?") back into the original single angelic being, back into himself, a process foreshadowed on the opening page of The Exorcist ("that matter was Lucifer upward groping back to his God").'

In the scheme of the universe, according to Teilhard, the case that interests us most is the “problem of man”. In particular, Teilhard states, “the existence of an ascendant movement in the universe has been revealed to us by the study of paleontology.” He then asks “where is man to be situated in this line of progress?”

“In terms of our modern neoanthropocentricity, man, both diminished and enlarged, becomes the head (terrestrial) of a universe that is in the process of psychic transformation—man, the last-formed, most complex and most conscious of ‘molecules’.” [2]

In his L’Energie Humaine (Human Energy), a collection of essays on morality and love, written between 1931 and 1939, Teilhard conceives of man as a “human molecule” (1936). In his 1947 essay “The Formation of the Noosphere”, he outlines the global view that “no one can deny that a network (a world network) of economic and psychic affiliations is being woven at ever increasing speed which envelops and constantly penetrates more deeply within each one of us. With every day that passes it becomes a little more impossible for us to act or think other wise than collectively.” In relation to the individual person, he concludes “the scope of each human molecule, in terms of movement, information and influence, is becoming rapidly coextensive with the whole surface of the globe” [3] In other words, according to Teilhard, human molecules are forming a connective sheath or skin around the globe of the earth.

In his A Sketch of a Personalistic Universe, Teilhard states “there is neither spirit nor matter in the world; the stuff of the universe is spirit-matter. No other substance but this could produce the human molecule. I know very well that this idea of spirit-matter is regarded as a hybrid monster, a verbal exorcism of a duality which remains unresolved in its terms. But I remain convinced that the objections made to it arise from the mere fact that few people can make up their minds to abandon an old point of view and take the risk of a new idea... Biologists or philosophers cannot conceive a biosphere or noosphere because they are unwilling to abandon a certain narrow conception of individuality. Nevertheless, the step must be taken. For in fact, pure spirituality is as unconceivable as pure materiality. Just as, in a sense, there is no geometrical point, but as many structurally different points as there are methods of deriving them from different figures, so every spirit derives its reality and nature from a particular type of universal synthesis.”

Name
The shortened version of his name is "Pierre Teilhard". His full name can be seen on his headstone in the Jesuit cemetery in Hyde Park, New York. The translation reads Father Pierre Teilhard de Chardin; S.J. Born 1 May 1881; Entered the Society of Jesus 19 March 1899; Died 10 April 1955. French and Belgian families often use two last names when one name has been ennobled. As stated in the French language version of Wikipedia, the Teilhards were descended from an ancient family of magistrates in Auvergne, France; and the de Chardin family was ennobled by Louis XVIII (1800s).