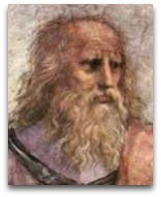 Motion
On motion, Plato, as summarized by Cicero (45BC), argued that there were two kinds of motion:

“Here we must lend an ear to Plato, the god so to say among philosophers. His view is that motion is of two kinds, the first self-propelled and the second directed from without; and that which is achieved spontaneously of its own accord is more divine than that awakened by the thrust of another. Spontaneous motion he attributes only to souls; in his view, it is from them that all motion takes its rise.”

Love | Soul
The following is Plato's a synopsis of Plato's famous soul mate theory of love:

“The intense yearning which lovers have toward each other does not appear to be the desire for sexual intercourse, but for something else which the soul of each desires and cannot tell, and of which he or she has only a dark and doubtful presentiment.”

In allegories, allegory of the charioteer is a famous metaphor, by Plato, from Phaedrus, wherein a person and his or her movements and or drives is conceptualized according to which reason is the charioteer guiding two horses, one the will, the other appetite. [1]

Egyptian | Greek science
Plato traveled to Egypt to learn their sciences and religio-mythology models, e.g. Nun cosmology, the logic of which was incorporated into the work of Aristotle and afterwords into science.

Vacuums
Plato found the idea of a vacuum inconceivable and was thus an advocate of the view that nature abhors a vacuum.

Teachers | Students
Plato was a student of Socrates and teacher to Aristotle.

Origin of life
Plato conceived of the ‘uroboros’, an entity that eats its own tail, as the first form of life.

Atomic theory
Plato, in his circa 360BC dialogue Timaeus, supposedly following Pythagoras, introduced the atomic theory proposition that ideal geometric forms serve as atoms, according to which atoms broke down mathematically into triangles, such that the form elements had the following shape: fire (tetrahedron), air (octahedron), water (icosahedron), earth (cube). [2]

Elements
Plato credits Empedocles as having created this list of elements.

Quotes | On
The following are quotes on Plato:

“Plato, the great creator of chimeras, says that ‘those who admit nothing but what they can see and feel, are stupid and ignorant beings, who refuse to admit the reality of the existence of invisible things’. Our theologians hold the same language to us: our European religions, have visibly been infected with the reveries of the Platonists, which evidently are no more than the result of obscure notions, and of the unintelligible metaphysics of the Egyptian Chaldean, and Assyrian priests, among whom Plato drew up his pretended philosophy. Our theologians, still guided by the enthusiasm of Plato, discourse with their followers only of spirit; intelligent, incorporeal substances; invisible powers; angels; demons of mysterious virtues; supernatural effects; divine inspiration; innate ideas, &c., &c.””

“Whoever will take the trouble to read the works of Plato and his disciples, such as Proclus, Jamblicus, Plotinus, &c. will find in them almost all the doctrines and metaphysical subtilties of the Christian teleology. Moreover, they will find the origin of the symbols, the rites, the sacraments, in short, of the theurgy, employed in Christian worship, who, as well in their religious ceremonies as in their doctrines, have done no more than follow, more or less faithfully, the road which had been traced out for them by the priests of paganism. With respect to the ancient philosophy, with the exception of that of Democritus and Epicurus, it was, for the most part, a true theosophy, imagined by the Egyptian and Assyrian priests: Pythagoras and Plato have been no more than theologians, filled with enthusiasm, and perhaps with knavery. At least, we find in them a sacerdotal and mysterious mind, which will always indicate, that they seek to deceive or that they are not willing men should be enlightened. It is in nature, and not in theology, that we must draw up an intelligible and true philosophy.”

“Speaking of Plato, I will add, that no writer, ancient or modern, has bewildered the world with more ignes fatui [misleading influence], than this renowned philosopher, in ethics, in politics, and in physics. In the latter, to specify a single example, compare his views on the animal economy, in his Timaeus, with those of Margaret Bryan in her Conversations on Chemistry, and weigh the science of the canonized philosopher against the good sense of the unassuming lady. But Plato’s versions have furnished a basis for endless systems of ‘mystical theology’, and he is therefore all but adopted as a Christian saint. It is surely time for men to think for themselves, and to throw off the authority of names so artificially magnified.”

Quotes | By
The following are quotes by Plato:

“Those who are able to see beyond the shadows and lies of their culture will never be understood, let alone believed by the masses.”

“Philosophy is a mediation on death.”

“Until philosophers are kings, and the princes of this world have the spirit and power of philosophy, and political greatness and wisdom meet in one, cities will never cease from ill—no, nor the human race, as I believe—and then only will our state have a possibility of life and see the light of day. The truth is, that the state in which the rules and are most reluctant to govern is best and most quietly governed, and the state in which they are most willing is the worst.”