In allegories, Plato’s cave or “Plato’s allegory of the cave”, refers to []

Overview
In c.425BC, Socrates, supposedly, described a group of people who have lived chained to the wall of a cave all of their lives, facing a blank wall. The people watch shadows projected on the wall from objects passing in front of a fire behind them, and give names to these shadows. The shadows are the prisoners' reality. Socrates explains how the philosopher is like a prisoner who is freed from the cave and comes to understand that the shadows on the wall are not reality at all, for he can perceive the true form of reality (true reality) rather than the manufactured reality that is the shadows seen by the prisoners. The inmates of this place do not even desire to leave their prison; for they know no better life.

In c.407BC, Plato, Socrates' student, was taught this allegory, who therein perfected it, as presented in his Republic: 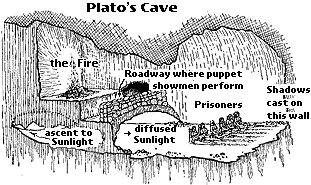 hence it became known as Plato’s allegory of the cave.

Macnab
In 1818, Francis Macnab, in his A Theory of the Moral and Physical System of the Universe, outlined a Plato’s allegory of the cave like section on how one’s beliefs—specifically beliefs about relative motion, and in turn “thought”—can reoccurringly be deceptive and false: [1]

§5. A man on board a ship, gliding in a calm sea, may imagine himself to be at rest, and think and act upon that supposition with the utmost propriety; because, though not absolutely at rest, he is relatively so. He afterwards, however, on going ashore, sits down, and, smiling at his mistake, says, ‘Now I See my error; I have not been at rest till now.’ But still he is mistaken; for the earth itself on which he sits or stands, is in motion round the sun. ‘Well, then,’ says he, ‘the sun at any rate is at rest.’ ‘Not so,’ says the well-informed astronomer; ‘the sun also, and the whole solar system, are in motion through absolute space.’ But here the person who was first deceived in the ship asks the astronomer, ‘What proof have you that the universe itself is fixed in absolute space? or what is it you call absolute? I have already been three times deceived by adopting that-term; and will henceforth ascribe the title of absolute to no created being.’ What has thus been said regarding motion, is true also regarding thought. In human knowledge, there is nothing absolute; no fixed principles; no standard to which we can appeal.”

This is relatively cogent, so-to-speak. With this said, however, Macnab goes on to assert, in downgrade form, in end footnote like style, that the only thing to which we can appeal is the word of god, citing Biblical passages; and that, therefore, we must search the Bible for the outlines of general knowledge, and a basis on which to build.

Watts
In 1960, Alan Watts, in his "Science and Buddhism" (V|13:51), explained how one can see a certain figure as either a bear climbing a tree or a tree with lopped off branches (left), depending on what you were told it was, in the same what that one can conceptualize an eclipse of the sun as either a dragon swallowing the sun, as in primitive cultures (e.g. ancient Egypt), or as the moon obfuscating view of the sun, as modern science explains things:

This is akin to a modern version of Plato's allegory of the cave, in respect to religious beliefs.

Matrix
In 1999, Andy Wachowski and Lana Wachowski, in their film The Matrix, presented a modern spin on Plato’s cave allegory, via the switch that the fire that makes the puppet plays the prisoners see on the wall, became computer programs running in minds of the prisoners who are in induced sleep in a factory, their bodies being used as energy sources to power something; wherein ripe topics including: reality, choice, causality (or cause and effect), purpose, (or sense of purpose), are discussed in film dialogue.

“The accepted belief in the theory of life is similar to Plato’s 400BC allegory of the cave. The person in the cave looks at the two shadows: (a) people walking in the sunlight and making shadows of walking people on the cave wall; (b) a person with moving puppets in the sunlight, making shadows of walking people on the cave wall. The person in the cave will look upon the shadows and naively conclude that ‘yes both shadows, a and b, are indicative that two different 'alive' entities outside the cave.’ The allegory of the molecular cave is the same. Wherever we see something that we deem as “alive”, be it a walking kinesin (6-element molecule) or a walking human (26-element molecule), we will always be able to look through the atomic telescope and see only an energy-driven molecule. In other words, belief that one of the molecules is alive is the same as belief in puppeteer’s animated shadow.”

References
1. Macnab, Francis M. (1818). A Theory of the Moral and Physical System of the Universe, Demonstrated by Analogy: in which the Elements of General Science are Explained Upon a Principle Entirely New. London: Ogles, Duncan, and Cochrane.