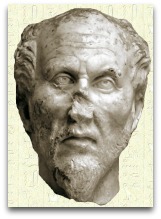 “What motion of atoms can one attribute to the actions and passions of the soul? . . . What movements of atoms stir the thought of the geometer, the arithmetician, or the astronomer? What movements are the source of wisdom?”

“It is impossible for the association of material bodies to produce life and for things devoid of intelligence to engender intelligence. . . . For there would be no composite bodies and not even simple bodies in the reality of the world, were it not for the pervasive soul of the universe.”

In the following, Plotinus talks about affinities:

“We have learned, further, something of our human standing; we know that we too accomplish within the all a work not confined to the activity and receptivity of body in relation to body; we know that we bring to it that nature of ours, linked as we are by affinities within us towards the answering affinities outside us; becoming by our soul and the conditions of our kind this linked—or, better, being linked by nature—with our next highest in the celestial or demonic realm, and thence onwards with those above the celestials, we cannot fail to manifest our quality.”

“Whoever will take the trouble to read the works of Plato and his disciples, such as Proclus, Jamblicus, Plotinus, etc., will find in them almost all the doctrines and metaphysical subtilties of the Christian teleology. Moreover, they will find the origin of the symbols, the rites, the sacraments, in short, of the theurgy, employed in Christian worship, who, as well in their religious ceremonies as in their doctrines, have done no more than follow, more or less faithfully, the road which had been traced out for them by the priests of paganism. With respect to the ancient philosophy, with the exception of that of Democritus and Epicurus, it was, for the most part, a true theosophy, imagined by the Egyptian and Assyrian priests: Pythagoras and Plato have been no more than theologians, filled with enthusiasm, and perhaps with knavery. At least, we find in them a sacerdotal and mysterious mind, which will always indicate, that they seek to deceive or that they are not willing men should be enlightened. It is in nature, and not in theology, that we must draw up an intelligible and true philosophy.”

Quotes | By
The following are quotes by Plotinus:

“Matter is no soul; it is not intellect, is not life, is no ideal principle, no reason principle; it is no limit or bound, for it is mere indetermination; it is not a power, for what does it produce?”

“Without soul there would be only stark body—clay and water—or rather the blankness of matter, the absence of being, and, as an author says, the ‘excretion of gods’.”

“Whenever anything reaches its own perfection, we see that it cannot endure to remain in itself, but generates and produces some other thing. Not only beings having the power of choice, but also those which are by nature incapable of choice, and even inanimate things, send forth as much of themselves as they can: thus, fire emits heat and snow cold and drugs act upon other things.”

“The existence thus produced by or through being, and called life, is a mode of intellectual existence characterized by discursive thought, or that manner of thinking which divides the objects of thought in order to categorize them and make them knowable through the relational process of categorization or 'orderly differentiation'. ”

“An invisible and unchanging beauty pervades all things.”