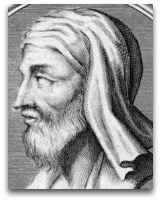 Good | Evil
Plutarch, in his On Isis and Osiris (§44), on the subject of good and evil, and it apparent commingling throughout religion and philosophy, says the following: [7]

“There are some who would make the legend an allegorical reference to matters touching eclipses; for the moon suffers eclipse only when she is full, with the sun directly opposite to her, and she falls into the shadow of the earth, as they say Osiris fell into his coffin. Then again, the moon herself obscures the sun and causes solar eclipses, always on the thirtieth of the month; however, she does not completely annihilate the sun, and likewise Isis did not annihilate Typhon [Set].

There are some who give the name of Typhon to the earth's shadow, into which they believe the moon slips when it suffers eclipse. Hence it is not unreasonable to say that the statement of each person individually is not right, but that the statement of all collectively is right; for it is not drought nor wind nor sea nor darkness, but everything harmful and destructive that nature contains, which is to be set down as a part of Typhon. The origins of the universe are not to be placed in inanimate bodies, according to the doctrine of Democritus and Epicurus, nor yet is the Artificer of undifferentiated matter, according to the Stoic doctrine, one reason, and one providence which gains the upper hand and prevails over all things. The fact is that it is impossible for anything bad whatsoever to be engendered where God is the Author of all, or anything good where God is the Author of nothing; for the concord of the universe, like that of a lyre or bow, according to Heraclitus, is resilient if disturbed; and according to Euripides:

The good and bad cannot be kept apart,
But there is some commingling, which is well.

Wherefore this very ancient opinion comes down from writers on religion and from lawgivers to poets and philosophers; it can be traced to no source, but it carried a strong and almost indelible conviction, and is in circulation in many places among barbarians and Greeks alike, not only in story and tradition but alsoin rites and sacrifices, to the effect that the universe is not of itself suspended aloft without sense or reason or guidance, nor is there one reason which rules and guides it by rudders, as it were, or by controlling reins, but, inasmuch as nature brings, in this life of ours, many experiences in which both evil and good are commingled, or better, to put it very simply, nature brings nothing which is not combined with something else, we may assert that it is not one keeper of two great vases who, after the manner of a barmaid, deals out to us our failures and successes in mixture, but it has come about, as the result of two opposed principles and two antagonistic forces, one of which guides us along a straight course to the right, while the other turns us aside and backward, that our life is complex, and so also is the universe; and if this is not true of the whole of it, yet it is true that this terrestrial universe, including its moon as well, is irregular and variable and subject to all manner of changes. For if it is the law of nature that nothing comes into being without a cause, and if the good cannot provide a cause for evil, then it follows that nature must have in herself the source and origin of evil, just as she contains the source and origin of good.”

Isis | Osiris
In c.100AD, Plutarch, in his On Isis and Osiris, penned one of the first commentaries, since Herodotus (c.435BC), on Egyptian mythology; the following are example quotes:

“It may be that this fabular relation borders on the verity of physical science.”

The following are abstracts:

“The nearest thing to a truly national religion in Egypt was the Osiris cycle. The story is not extant in full epic version but must be pieced together from several ancient and classical sources: the Pyramid Texts of the Old Kingdom, the Coffin Texts of the Middle Kingdom, the Book of the Dead from the New Kingdom, a ribald text entitled The Contest of Horus and Seth for Rule from the Twentieth Dynasty, and the summary of Plutarch in Concerning Isis and Osiris from the second century C.E.”

“Plutarch's version of the myth of Isis and Osiris connects the various episodes, many of which can be documented from Egyptian sources, into a single, running narrative (On Isis and Osiris, 12-19). The story begins with Kronos (Geb, the Egyptian earth god) and Rhea (Nut, the Egyptian sky goddess) overcoming the curse of Helios (Re, the sun god) with the help of Hermes (Thoth, the Egyptian moon god) by producing five children on five intercalary days: Osiris, Horus, Typhon (Set), Isis, and Nephthys. As pharaoh of Egypt, Osiris brings civilization to that country and to the whole world. Typhon, however, gathers conspirators and plots to kill Osiris. First, he imprisons Osiris within a coffin and throws it into the Nile River, and later he dismembers the body of Osiris and scatters the pieces all around Egypt. One piece, the penis, is lost forever in the Nile River. In both episodes, the reproductive power of Osiris is sub-merged in the Nile. (Isis grieving and searching for Osiris and burning away the mortality of the infant prince of Byblos can be compared with …”

Plutarch, who writes, in c.100AD, about Osiris (but NOT Jesus) and the peculiar birth of Horus; specifically: [6]

“Osiris, who the Greeks conclude to have been the same person with their Dionysus [Greek] or Bacchus [Roman], was accompanied, after his death, without his phallus, by Isis [Stella Maris], and in consequence hereof to have brought forth Harpocrates [Horus].”

Cold element
Plutarch, in his “On the Principle of Cold” (c.118AD), a letter to Roman sophist-philosopher Favorinus (c.80-160AD), a debate on whether such a thing as an element of cold exists, revolving around what Aristotle and others had to say on the matter, opened to the following: [1]

“Is there an active principle or substance of cold (as fire is of heat) through the presence of which and through participation in which everything else becomes cold? Or is coldness rather a negation of warmth, as they say darkness is of light and rest of motion? Cold, indeed, seems to have the quality of being stationary, as heat has that of motion; while the cooling off of hot things is not caused by the presence of any force, but merely by the displacement of heat, for it can be seen to depart completely at the same time as the remainder cools off. The steam, for example, which boiling water emits, is expelled in company with the departing heat; that is why the amount becomes less by cooling off; for this removes the heat and nothing else takes place.”

The above “is coldness rather a negation of warmth, as they say darkness is of light and rest of motion?”, to note, was restated later by Rene Descartes, in regards to the “idea of god”; and also later mis-attributed to Einstein (Ѻ).

Theseus’s paradox
Plutarch, supposedly, disputed Heraclitus' claim about stepping twice into the same river, citing that it cannot be done because “it scatters and again comes together, and approaches and recedes.” He eventually summarized the paradox in the form of the story of the ship of Theseus, which had its parts continuously replaced each time one broke or rotted, after which philosophers began to puzzle as to whether it was really the same ship:

“The ship wherein Theseus and the youth of Athens returned from Crete had thirty oars, and was preserved by the Athenians down even to the time of Demetrius Phalereus, for they took away the old planks as they decayed, putting in new and stronger timber in their place, in so much that this ship became a standing example among the philosophers, for the logical question of things that grow; one side holding that the ship remained the same, and the other contending that it was not the same.”

This ship question came to be known as “Theseus’s paradox”; an early version of the turnover rate paradox of self, wherein elements (or atoms) are substitute for ship parts. [5]

Chemistry | Etymology
The etymology of the word “chemistry” (see: chemistry etymology), according to English chemistry historian James Partington, derives from the native designation of Egypt, a country called chēmia, as described by Plutarch in his 100AD book On Isis and Osiris, which, according to Plutarch, was called as such owing to the black color of its soil; this etymology is confirmed by Egyptian inscriptions, where the hieroglyphic form of the word is used. [1]

On Listening
Plutarch, in his On Listening to Lectures, described education, via thermal word language, as follows: [2]

“We must encourage those lazy ones, however—once they have grasped the basic points—to interconnect everything else on their own, to use memory to guide original thinking, and to accept what someone else says as a starting point, a seed to be nourished and grown. For the correct analogy for the mind is not a vessel that needs filling, but wood that needs igniting—no more—and then it motivates one towards originality and instils the desire for truth.

Suppose someone were to go an ask his neighbors for fire and find a substantial blaze there, and just stay there continually warming himself: that is no different from someone who goes to someone else to get some of his rationality, and fails to realize that he ought to ignite his innate flame, his own intellect, but is happy to sit entranced by the lecture, and the words trigger only associative thinking and bring, as it were, only a flush to his cheeks and a glow to his limbs’ but he has not dispelled or dispersed, in the warm light of philosophy, the internal dank gloom if his mind.”

Into the 1990s, to note, a variant of the above, namely: “education is the kindling of a flame, not the filling of a vessel”, began to be misattributed vicariously to Socrates. (Ѻ)

“The soul, being eternal, after death is like a caged bird that has been released. If it has been a long time in the body, and has become tame by many affairs and long habit, the soul will immediately take another body and once again become involved in the troubles of the world. The worst thing about old age is that the soul's memory of the other world grows dim, while at the same time its attachment to things of this world becomes so strong that the soul tends to retain the form that it had in the body. But that soul which remains only a short time within a body, until liberated by the higher powers, quickly recovers its fire and goes on to higher things.”

“The mind is not a vessel to be filled but a fire to be kindled.”

“Whenever we begin an enterprise or take possession of a charge, or experience a calamity, we place before our eyes the examples of the greatest men of our own or of bygone ages, and we ask ourselves how Plato, or Epaminondas, or Lycurgus, or Agesilaus, would have acted. Looking into these personages, as into a faithful mirror, we can remedy our defects in word or deed.”

“The Romans revere flame symbolically, because it is like a living thing. It needs air and sustenance, it moves of itself, and when it is extinguished, with water, it gives out a sound as if it were being slain.”