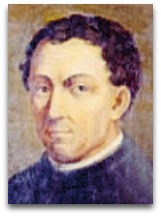 In existographies, Poggio Bracciolini (1380-1459) (CR:5) was an Italian papal secretary noted for travels to German, Swiss, and French monastic libraries in search of forgotten classic Latin manuscripts; his 1417 discovery of Lucretius’ On the Nature of Things (55BC), then considered non-extant, being his most famous find. [1]

Lucretius
In Jan 1417, Bracciolini, while scouting about German monasteries in search of rare “humanism” books of antiquity, discovered Lucretius’ 55BC atomic theory based On the Nature of Things—all copies previous thought destroyed or non-existent—which he sent to his wealthy associate Niccolo Niccoli, inventor if italic script, a noted book collector whose aim was to will his final collection with funds into the form of Italy's first public library; Niccoli made more than fifty copies, in book form.

Some, e.g. Stephen Greenblatt (2011), have credited Bracciolini’s 1417 find of Lucretius’ On the Nature of Things (55BC) as having initiating the renaissance and or scientific revolution; similar to how some, e.g. William Fitzgerald (2015) (Ѻ), have compared Petrarch’s 1385 find of the lost Letters of Cicero (50BC), i.e. the personal correspondences of Cicero, to have initiated the Renaissance. [1] David Wilson-Okamura (2010), in this sense, refers (Ѻ) to Bracciolini as the “Magellan” and Petrarch as the “Columbus” of manuscript-discovery.

Cicero
In 1390 to 1420, Poggio, together with Coluccio and Nicolo Niccoli, were involved with the gathering of all the range of philosophy written in Latin into orderly collections; one of which was Cicero’s On the Nature of the Gods. [2]