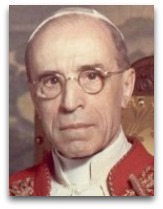 In hmolscience, Pope Pius XII (1876-1958) was an Italian religious leader, the head of the Catholic Church from 1939 to 1958, and is noted, in religious thermodynamics, for his "notorious" 28 Nov 1951 “Theology and Modern Science” address, wherein he cited the second law as evidence of the existence of god or "necessary being" as he phrases things.

Overview
In 1951, Pope Pius XIII gave his his notorious Nov 28 lecture, entitled “Theology and Modern Science”, in which he argued that Rudolf Clausius' second law of thermodynamics provides "eloquent evidence of the existence of a Necessary Being." [1]

The oft-cited excerpt from the lecture, found in his sub-section “Direction of Transformations: In the Macrocosm; the Law of Entropy”, is as follows: [2]

“Modern science has not only widened and deepened our knowledge of reality and the vastness of the mutability of the cosmos; it likewise provides us with valuable indication on the direction taken by the processes of nature. As late as a hundred years ago, especially after the discovery of the law of the conservation of energy, it was thought that natural processes were reversible. Consequently, in conformity with the principles of strict causality, or rather the determination, of nature, an ever-recurring renovation and rejuvenation of the cosmos was regarded as possible. Through the law of entropy, however, discovered by Rudolf Clausius, it was recognized that the spontaneous processes of nature are always accompanied by a diminution of free and utilizable energy. In a closed material system this conclusion must lead, eventually, to the cessation of processes on a macroscopic scale. This unavoidable fate, from which only hypotheses—sometimes unduly gratuitous—such as that of continued supplementary creation, have endeavored to save the universe, but which instead stands out clearly from positive scientific experience, postulates eloquently the existence of a necessary being.”

In other words, Pope Pius XII is trying to say that because the universe has not run down to heat death and cessation of operation, this must be evidence that God is keeping the processing going, or something to this effect.