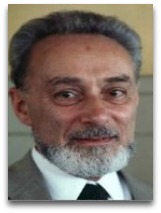 In human chemistry, Primo Levi (1919-1987) was an Italian chemist noted for his 1975 book The Periodic Table, a type of literature chemistry book, which is comprised of twenty-one chapters, each chapter with the name of an element (of the periodic table) that either plays a role in that particular chapter or exhibits characteristics that are said to be "metaphorically descriptive of human relationships" portrayed in that chapter, with the last chapter “Carbon” said to the most impactive. [1]

Both English physicist and chemist Philip Ball and American science-infused literature critique Bruce Clarke have commented in detailed review on the implications and underlying messages and humanistic content of Levi's The Periodic Table. [2]

“Silence slowly prevails and then, from my bunk on the top row, I see and hear old Kuhn praying aloud, with his beret on his head, swaying backwards and forwards violently. Kuhn is thanking god because he has not been chosen. Kuhn is out of his senses. Does he not see Beppo the Greek in the bunk next to him, Beppo who is twenty years old and is going to the gas chamber the day after tomorrow and knows it and lies there looking fixedly at the light without saying anything and without even thinking anymore? Can Kuhn fail to realize that next time it will be his turn? Does Kuhn not understand that what has happened today is an abomination, which no propitiatory prayer, no pardon, no expiation by the guilty, which nothing at all in the power of man can ever clean again? If I was god, I would spit at Kuhn’s prayer.”