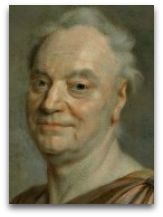 In human chemistry, Prosper Crebillon (1674-1762), pronounced "cray-bee-yawn", was a French tragedian writer noted for producing dramitic works that, according to German polymath Johann Goethe, treated the "passions like playing cards", i.e. were not “chemical” enough, i.e. based in reality in the way that people attract, repel, and neutralize each other in their interactions and passionate relationships.

Overview
The actual mention of Goethe's objection to the non-chemical reality of Crebillon's work was made in an October 23, 1799 letter to his associate German author Friedrich Schiller as follows: [1]

“Crebillon … treats the passions like playing cards, that one can shuffle, play, reshuffle, and play again, without their changing at all. There is no trace of the delicate, chemical affinity, through which they attract and repel each other, reunite, neutralize [each other], separate again and recover.”

This irritation found release ten years later in the writing the great novella Elective Affinities, the founding book of the science of human chemistry—the study of chemical reactions between people—in which Goethe used Swedish chemist Torbern Bergman's 1775 physical chemistry textbook A Dissertation on Elective Attractions to "treat the passions", as he put it, according to the way in which relationships are actually governed by the laws of affinity or rather in which the passions occur in reality in chemical reactions.

Change
That there is great density of thought in the above objection comment made by Goethe, there is no doubt. What exactly Goethe means by "without their changing at all" in the chemical sense of his day is a bit elusive to pin down. The actual full explication of the quantification and description of chemical change would not be made until the year 1865 with the completion of the definition of "irreversibility" of chemical reactions as quantified by German physicist Rudolf Clausius who would define irreversibility in terms of the labels: "equivalence value of all uncompensated transformations", "transformation content", or entropy, depending on the context of the discussion and reaction scenario; terms which are quite complicated to explain in terms of change in human relationships.

Passion
The literary term "passion" tends to be representative of the physical term "heat" and following the great thermal theory of affinity debate (1854-1882), on the topic of whether or not heat was the true driving force of chemical reactions, in the sense that the more heat that was released in a given reaction the greater the affinity between the reactants, the chemical interpretation of passion and change only become more complicated. In short, German physicist Hermann Helmholtz' 1882 paper "On the Thermodynamics of Chemical Processes" disproved the thermal theory of affinity, putting in place of it the "thermodynamic theory of affinity", namely that the true driving force of chemical reactions is not "heat" but rather "free energy", hence the modern literary writer in the years to follow would have needed to reinterpret passion in terms of free energy, in particular Gibbs free energy, if one was to construct a drama or literary work using chemical models.

This has since never been done, which largely owes to the fact that one needs to have a degree in physical chemistry or chemical thermodynamics, at a minimum, and to spend at least a decade's worth of research on this topic, to understand the densely-woven mathematics behind the term "Gibbs free energy", which translates to the effect that instead of simply speaking of "affinities", as Goethe did, the modern literary writer would need to speak of three different types of energies: internal energy, pressure-volume work energy, and entropy, as these are now the modern chemical thermodynamic terms used in the quantification of earth-bound freely going chemical reactions (e.g. human chemical reactions) or in the the "treating of passions", in Goethe's phrasing.

A notable exception is British playwright Tom Stoppard and his 1993 play Arcadia a somewhat modern attempt a remake of Goethe’s 1809 Elective Affinities. Although not a physical chemist or chemical engineer, Stoppard writes the play such that it takes place in two different time periods, 1809, the year of Goethe’s novella and the modern day, incorporating talk of “sexual energy”, “heat”, entropy, via his discussion of the “second law of thermodynamics”, and human chemical affinity, via his talk of “the attraction that Newton left out … all the way back to the apple in the garden” (Isaac Newton being the one that launched the science of affinity chemistry via his Query 31), the steam engine, upon which the laws of thermodynamics were derived, among other topics. [2]