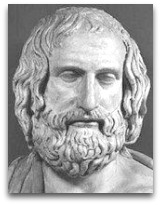 In existographies, Protagoras (c.490-420BC) (FA:8) (ACR:21) (CR:11) was a Greek philosopher, possible student of Democritus, noted, in the atheism timeline, for expressing the first agnostic views on the existence of the gods, for which he was labeled an atheist, and his books were burned.

“Concerning the gods, I am unable to discover whether they exist or not, or what they are like in form; for there are many hindrances to knowledge, the obscurity of the subject and the brevity of the human mind.”

“There are two sides to every question.”

For these views, he became the first person to be “labeled” an atheist.

Though technically, these views are what we now characterize as “agnostic”, a term coined in 1869 by Thomas Huxley.

Because Protagoras had doubted the existence of gods he was banished and his works were burned publicly (see: book burning). [2]

Works
Books written by Protagoras, according to According to Diogenes Laërtius, include: On the Gods, Art of Eristics, Imperative, On Ambition, On Incorrect Human Actions, On those in Hades, On Sciences, On Virtues, On the Original State of Things and Trial over a Fee.

Student of Democritus?
In 322 BC, Aristotle, in his On Education, says that Protagoras invented the “arm pad” used by porters.

In 300BC, Epicurus, in his letter “On Professions”, described (Ѻ) Protagoras as: “porter, Democritus’ copyist, village teacher”. [5]

In c.160 ACM, Aulus Gellius (125-180AD), in his Attic Nights, reported that Democritus saw Protagoras working as a porter and observed his ‘ingenious method” of making knots or bundles of wood, and therein took him on as a pupil. (Ѻ)

In c.230 ACM, Diogenes Laertius, in his The Lives and Opinions of Eminent Philosophers, reported that Protagoras (c.490-420BC) originally was a porter, and that he was discovered by Democritus (c.460-370BC) who saw how skillfully his bundles were tied, who therein took him in as a pupil. [4]

That Protagoras, according to consensus dating, seems to have been about 20 to 30 years older than Democritus, the “teacher-student” connection may have been invented, contrived, or confabulated history, as several (Ѻ) have argued. [5]

Quotes | On
The following are quotes on Protagoras:

“Protagoras however professed himself in doubt on the matter and Diagoras of Melos and Theodorus of Cyrene did not believe them to exist at all.”

“With the sensationalism of Protagoras is combined a relativity which may remind us of the Buchner and Moleschott.”

“Meslier’s war cry [Testament, 1729], never before heard in the history of western thought, offers one of the first true atheist moments, if not the first. Prior to him, they call the agnostic an atheist who, as Protagoras, concludes that when it comes to god one can conclude nothing; the pantheist who, such as Spinoza, affirms its existence consubstantial with nature; the polytheist, like Epicurus, who teaches its multiplicity; the deist, in the way of Voltaire, for whom god creates the world en bloc, but does not care about the details; or whoever’s idol does not correspond to the strict criteria established by the church. Now, the atheist clearly says that ‘god does not exist’. This is what Meslier clearly writes: ‘there is no god’ (chapters 59, 74, 93, 94)—that is clear and distinct, blunt, and straightforward.”