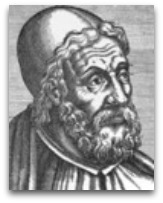 Geocentricism
Ptolemy’s geocentric cosmology, held that the earth was the center of the cosmos, kept in position by the mutual attraction and repulsion of the stars and planets which revolved about it. [1]

Quotes | On
The following are quotes about Ptolemy:

— Dennis Danielson (2001), The Book of the Cosmos: Imagining the Universe From Heraclitus to Hawking (Ѻ)

“I know that I am mortal by nature and ephemeral, but when I trace at my pleasure the windings to and fro of the heavenly bodies, I no longer touch earth with my feet. I stand in the presence of Zeus himself and take my fill of ambrosia.”

“As material fortune is associated with the properties of the body, so honor belongs to those of the soul.”