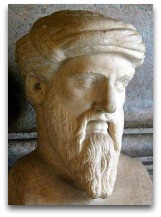 In existographies, Pythagoras (c.570-490BC) (IQ:180|#86) (Cattell 1000:89) [RGM:15|1,500+] (GME:11) (ACR:6) [CR:115] was a Greek mathematician and philosopher, smartest person ever (Ѻ), albeit characterized as the “most mysterious figure in the history of Greek philosophy”, commonly known for his Pythagorean theorem.
-
Overview
Pythagoras, supposedly, left no writings of his own behind; what details that exist of him are reconstructed from several secondary sources.
Souls
Pythagoras, according to Xenophanes, headed an academy, school or sect—the Pythagoreans—that flourished from 532-390BC in Crotona, Italy, that adhered to the doctrine of “transmigration”, that of the movement of souls, upon death, from one kind of living creature to another; one repercussion being a vegetarianism dietary system.

Pythagoras believed in the transmigration of souls and therefore, via reason of logic, was a vegetarian, and did not want to eat the body of an animal that might be the abode of a dead friend (compare: Newton in Senegal). (Ѻ)

Education
Pythagoras was taught by Thales, who "who refers everything to water" (Augustine, c.410), from whom he gained an appreciation of geometry, and his pupil Anaximander. [5] Pythagoras, supposedly, was also a student of Pherecydes (c.580-520BC), who, according to Cicero, was the inventor of the concept of the soul.

Aristotle (384-322BC), in his Metaphysics, makes his first mention of Pythagoras as follows: [2]

“Among these philosophers [sc. Leucippus and Democritus] and before them, the Pythagoreans, as they are called, were the first do deal with mathematics and they made advances in this field; moreover, having been brought up in it, they believed the principles of mathematics to be the principles of everything there is … Since all other things seemed in their whole nature to be modeled on numbers, and numbers to be the first in all of nature, they held the elements of numbers to be the elements of everything there is.”

Egypt | Heliopolis
Pythagoras, and after him Plato, both went to study in Heliopolis, the famous university town of ancient Egypt. [4]

Pythagoras, supposedly, drew upon Egyptian myths—a model according to which, based on the Heliopolis creation myth, the world came into being accruing via the steps: water (Ab/Nun) → earth (Atum/keme) → fire (Ra) → air (Shu)—that the world was created from a single resonance; his studies of the physics of sound led him to discuss the music of spheres. [1]

Pythagoras taught a cosmology, with the earth as the center of the universe, i.e. Geb-centric, in Egyptian cosmology, or geo-centric, in modern Greek language based terminology); and in terms of ethics, believed that the soul was a form of number that moved through various reincarnations toward complete purity. [5]

Atomic theory | Element theory
Empedocles (495-435 BC), supposedly, adopted Pythagoras’ numerology technique in an attempt to quantify the chemistry of his four elements model; according to which, e.g., animal bone consisted of two parts water, two parts earth, and four parts fire, or that because he believed that all of his four elements were most thoroughly mixed in blood, people he conceptualized thought mainly with their blood. [3]

Plato (427-348BC), in his in his circa 360BC dialogue Timaeus, supposedly, following Pythagoras, introduced the atomic theory proposition that ideal geometric forms serve as atoms, according to which atoms broke down mathematically into triangles, such that the form elements had the following shape: fire (tetrahedron), air (octahedron), water (icosahedron), earth (cube). This, however, was not atomic theory proper, but rather the four element theory.

Quotes | On
The following are quotes on Pythagoras:

“Pythagoras taught that the original of all things is the monad, that from the monad sprung the duad, which is the subject matter to the efficient monad: that from the monad and infinite duad were formed the numbers: from the numbers the points; from them the lines, from these figures of superficies; from the superficies the solid figures; from these the solid bodies, of which are the elements, fire, water, earth, air:—that from these, changed and converted into every shape, is formed the world, which is animated, intelligent, of a spherical shape, comprehending in its middle the earth, which also is spherical and inhabited all round.”

“Know, so far as is permitted thee, that nature is in all things uniform.”