The Ra theological system, accounts for over 72 percent of the morality system of the modern world, is derived from the 3,000BC Egyptian life-death cycle rebirth (reincarnation) or singular rebirth (resurrection) or theory of the sun or sun god Ra (or Re) born out of the primordial mound Nu (or Nun), in particular the B-ra-hma-ic faiths (1000BC) and the Ab-ra-ham-ic faiths (500BC). [1] In short, the names Abraham and Brahma mean “farther Ra sun of nun”; whereby, subsequently, the various theological spin-offs, listed below, are simply reformulated versions of the story of Ra and the system of human negative confession morality and purpose connected therein.

The six main giveaways that show the underlying Egyptian connections between the two main world religions religions, i.e. Vedic and Torah, are:

Son
(f) Both Abraham and Brahma have the same slaying of son parable (release of the soul rewrite).

Etymology
The name Ra is the name assigned to the sun god of the ancient Egyptian city of Heliopolis, the "city of sun" (3,100BC), said to have been born each day out of the original primeval mound Nu or Nun. The name Ra was written in Hieroglyphics as:

The middle symbol of the circle rising above a vertical line is representative of the rising of the sun, the falcon-headed human form of Ra, with the ankh (symbol of life or spirit), is balanced on his knees and the sun disk balanced on his head, shown to the right. [4]

In 2,040BC, Memphis became major center of worship in Egypt, during which time Ra, became a syncretism of the local god Amen in the form of Amen-Ra. A hieroglyph from this period is show water waves representative of the primordial flood aspect of Nun (or Noah, in later Judea-Christian-Islam version; or Ma-Nu, in later the Hindu version).

In c.1340BC, in the “Hymn to Aten”, commissioned by Egyptian pharaoh Akhenaten, the first monotheist pharaoh, we begin to see Ab-Ra-ham like namesakes, e.g. Nefer-kheperu-Ra-ua-en-Ra, meaning “the son of the sun” or “beauty of the creations of Ra, the only one of Ra”, being used, such as the following section shows: [7] 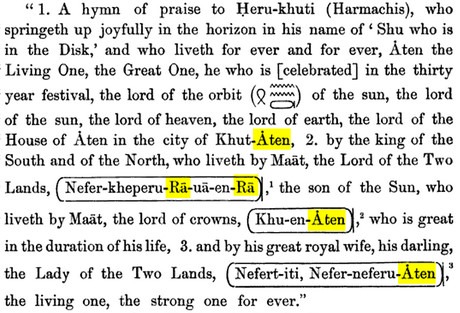 Here, the suffix -Aten (sun disc) and -Ra- or -Ra (sun god) have been highlighted yellow, to accentuate the hieroglyphic to spoken name to English translation nature of Ra-based namesakes. The monotheistic religion established by Akhenaten and the migration of him and his followers from Thebes to Amarna, similar to the story of the monotheism established by the fictional Moses and the migration of him and his followers from Egypt to Jerusalem, as many have argued, as pointed out by Budge (1904), soon thereafter became one of the roots of the fictional character of Ab-Ra-ham, the namesake of which being a figurative way of saying "god Ra, born out of the Nun (water / -Ab), out of which the land (keme / -ham) arose". The hyphens, over time became removed, and the namesake Abraham remained.

With the rise of Hinduism (1000BC) and Judaism (500BC), the theology of Ra became re-written, through religious syncretism, into a Brahma-based theology and Abraham-based theology, respectively, the names of each meaning etymologically:

The suffix term -ham (or hma), pronounced "chem" (or 'keme'), refers to the Egyptian black soil (of the Nile) or primordial land mound (Nun or Noah) that arose out the primeval water (annual 120-day flooding of the Nile), from which the sun god was born, the same root word for the science of chemistry, i.e. the "Egyptian black art". [3]

Cosmic egg
Ra, the God and father all, the un-generated original of the universe, according to one version of his creation, was said to have laid a premordal egg in the chaotic waters of beginning from which he was himself reborn, born-again, or self-generated. This version is said to be found in the Papyrus of Nesi Amsu (link). Although the born of the cosmic egg creation theory does not seem to be found in the Abrahamic version (which used the Noah’s arch rewrite, where Nun became Noah), it was carried over into the alternative legend that Brahman was born in water, in which a seed was laid that turned into a golden egg and this was later turned into the universe or Brahma.

Morality
The system of morality in Ra theology is based on the "negative confessions", which were 42 bad, evil, or forbidden actions prohibited to the Egyptian people, theorized to be morally wrong.

The accumulations of these evils in the "ba" or soul of the Egyptian, theorized to be located in the heart, would be transported to the great judgment hall (in the heavens), proceeded over by 42 gods (one for each sin), along with other gods such as Osiris (Ra's great-great grandson), and weighted on scale against the feather of truth, and if his or her soul was found to be too full of sin, they would not be granted eternal life (or reincarnation, in the Hindu-based versions), in the which the question of what constitutes "good" actions, which boil down to specific second-by-second movements of the human molecule, viewed in the structure of the long-term dynamical movement of the universe, is a very difficult topic. Confession or sin number eight (above), for example, states focuses on "lying", where it is said that all lies are sinful.

In modern philosophical debates, however, the "concentration camp lie", i.e. telling a lie about something in order to save your own life or the lives of your fellow inmates, is often used as an example of when it is supposedly "good" to lie.

An example stab at this issue, pictured above can be found in the 2009 work of English biophysicist Mark Janes and his attempt at formulating good and evil in terms of enthalpy change ΔH and entropy change ΔS.

Decipherment
After the deciphering of the Rosetta stone in 1822 by English physicist Thomas Young, after which it was possible to see clearly that the main tenets of the major modern day religions (Christianity, Islam, Hinduism, etc.) originated from the core tenets of circa 5,000 BC Egyptian mythology, those upon which the pyramids were built, particularly the story of the birth of the sun god Ra out of the water or chaos of beginning god Nu. The main stopping points of the evolution or syncretism of religious theory is further depicted (adjacent).

This issue of religious syncretism became even clearer to the inquisitive reader when in 1895 Egyptologist Wallis Budge published The Egyptian Book of the Dead (Papyrus of Ani), wherein after “untold numbers of people began to write books, papers, and dissertations on the parallels between Jesus and Osiris (Ra’s great grandson). [3] The issue can be said to have solidified, without doubt, certainly, after the publication of American religious scholar Gary Greenberg’s 2000 101 Myths of the Bible, wherein he steps through ever story in the Bible and shows the original Egyptian version, from which these stories originated. [5]

Ra, death, and the soul
The central conflict between science and religion is the belief that one has a soul and that when he or she dies, if they have lived a morally correct life, they will continue on to the next life or after life. This is a strong ingrained belief that about 80 percent of the world holds, in some way or another.

Hmol sciences
In modern terms, when confronted with the new view that each person is a human molecule, governed by the respective hmol sciences of human chemistry, human physics, and in particular human thermodynamics, often is the case that the person confronted with this, sometimes disturbing realization, reverts back to the olden day soul-spirit or ba-ka theory, arguing to the effect that their soul or spirit cannot be measured, quantified, or described by modern science, in particular the laws of thermodynamics, which are understood to govern all the operations of the known universe. [6]

Further reading
● Kahl, Jochem. (2007). Ra is my Lord: Searching for the Rise of the Sun God at the Dawn of Egyptian History. Otto Harrassowitz Verlag.