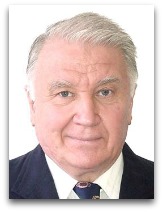 In existographies, Radu Chisleag (1940-) (SNE:15) (CR:19) is a Romanian physicist noted his 2003 to present human quantum mechanics theory, co-developed later with his daughter Romanian mathematician and lawyer Roxana Chisleag (2011), wherein they applied quantum mechanics, specifically the tunneling effect, to analysis of crossing of social barriers and financial relationship jumps, modeling a human as a quantum particle. [1]

Chisleag goes on to apply the Schrodinger equation of Erwin Schrodinger and the de Broglie waves of French physicist Louis de Broglie to the situation where "some individuals, even having been granted the right to act, are rejected at the step".

In conclusion, Chisleag comments the following about how stock market players might be bosons or fermions:

“A special class of barriers, of those having an axis of symmetry (symmetrical potential), is very important because the solutions of the Schrodinger equation spit themselves in two distinct classes: symmetrical and anti-symmetrical solutions. As is shown in quantum statistics the symmetrical solutions are describing the behavior of bosons (system particles able to occur in any number in a givens state) and fermions (system particles that can occur in different states only). This distinction between bosons and fermions would be important for players, eventually corresponding to those cooperating or respectively competing.”


This comment brings to mind Americans sociologist Ed Stephan’s 1977 discussions with physicist Louis Barrett on the physics behind the forces shaping populations, speculating on questions, such as: 'whether humans were fermions or bosons'. Chisleag also speculates that the Heisenberg uncertainty principle "may be valid in social and human behaviors."

In 2012, Radu, in his “A Socio-Physical Approach to Taking Decisions in Social Conflict”, together with Ioana-Roxana Chisleag, outline what they call the “socio-physical approach”, namely the use of the standard physics models: principle of objectivity of the laws of physics, conservation principles, laws of motion, inertia, action and reaction, principle of superposition of forces, to analyze decision making in social conflicts, specifically the conflicts amid the “Roşia Montană Project”, a joint venture between Roşia Montană Gold Corporation and the Romanian State, in respect to the legislation of mining precious minerals out of the land of Romania; the following are noted quotes:

“If human society be considered as being composed of a set of members, people or humans – individuals - relatively alike and equal between them, the principles of operation of such a society be somewhat similar to the principles of macroscopic classical physics, which apply to bodies composed of many molecules. The laws of physics, as applied to social life, may be considered as acceptable postulates in the socio-physical analysis, being based on pragmatic verification by general and specific social experience.”

Then, skipping some discussion of how Newton's laws theoretically apply socially, the give following superposition of social forces equation:

where if several forces F are acting on a body of mass m at the same time, each force produces its own acceleration a independently of the presence of the other forces, the resultant acceleration will be the vector sum of the individual accelerations. They surmized that this corresponds, socially, to a postulate of superposition of social actions involved in a social process, which they say would be useful in the multi-dimensional modelling of various social phenomena and forms of cooperation or confrontation, such as: negotiation, alliance, association between partners, in understanding the actions of classification and maintaining secrecy, diversion or lobbying, activity of inner city gangs, peer groups, cliques, political parties, secret societies or mafia-type gangs.