In religio-mythology, Raising of Lazarus, aka “Resurrection of Lazarus”, as found in the Bible, as told in John 11:1-14, is the miracle story of the resurrection of a man named Lazarus or "El-Asar", who had been dead for three days, by Jesus, done in the presence of two Mary figures (Martha and Mary), aka Mert goddesses, which is the Roman recension (see: recension theory) re-telling of the story of the raising of Osiris, from the dead by Horus, such as is told and depicted on the walls of the Dendera Temple (38AD), which is itself a re-write and or synretism of the "raising of Orion" constellation, as told in the story of the astro-theology god Sah. [1]

Overview
The raising of Osiris "by Horus", in Egyptian mythology, is something that postdates the raising of Osiris by the combined powers of both "Isis, Thoth, and Nephthys", as told in the famous Passion of Osiris (3,100BC) myth. The following, to situate things into context, is a 30AD stone-carved depiction, from the Dendera Temple, of the resurrection of Osiris by a pharaoh-like looking man, with an Ankh in his hand, whom Wallis Budge (1904) refers to as an unidentified "bearded god", shown raising Osiris from the dead (see: death and resurrection of Osiris) out of a bowl (or lotus flower), or some shape to this effect: 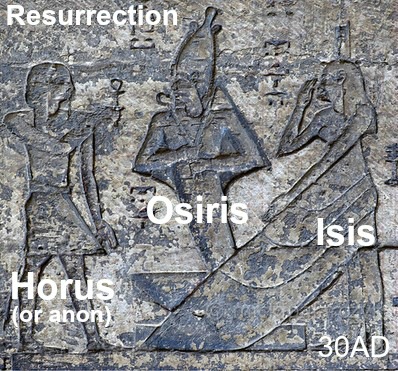 The following, similarly, shows the same story, from a Bas-Relief at Philae (250BC), below left, compared to the Roman recension version of the same story, showing Jesus raising Lazarus from the dead using a magic rod of some sort, from a gravestone of Datus (300AD):

In the Bible, (300AD), a total of ten people are raised from the dead, three of whom, including the character "Lazarus", are raised by Jesus personally: [1]

Not to mention a whole slew of saints that arose from the dead when Jesus died on the cross [Matthew 27:52].

“One thing is clear—the Mythos of the Hindus, the Mythos of the Jews, and the Mythos of the Greeks, are all, at the bottom, the same; and what are called their early histories are not the histories of man, but are contrivances under the appearance of histories, to perpetuate doctrines, or perhaps the history of certain religious opinions, in a manner understood by those only who had a key to the enigma. Of this we shall see many additional proofs hereafter. The histories of Brahma, of Genesis, and of Troy, cannot properly be called frauds, because they were not originally held out as histories; but as the covers for a secret system. But in later times they were mistaken for history, and lamentable have been the effects of the mistake. The history of Lazarus in the Gospel is not true, but it is not a fraud.”

“The rod [magic wand] that is waved by Jesus at the raising of Lazarus is the symbolic scepter [Ankh] in the hand of Horus when he raises the Osiris. Those who are present in this scene are Osiris, Isis, Nephthys, and Horus the reconstituter of the father, and these, are the prototypes or original characters of Lazarus, Mary, Martha, and Jesus in the scene of the resurrection at Bethany.”

“Imagine my surprise at discovering, during the research for The Pagan Christ, that Martha and Mary figure in a story about the raising from the dead of El-Asar, Lazarus, at an Egyptian Bethany about four-thousand years ago.”