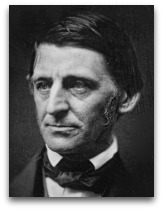 Material power | Moral power
Emerson, scatter in about five places in his 12-volume Collected Works, dug thematically at the premise that "moral power" is but a higher level form of "material power", and that the former always lags behind the latter in development, understanding, and application; the main statement on this are as follows:

“Moral power has not kept pace with material power.”

“It is too plain that with the material power the moral progress has not kept pace. It appears that we have not made a judicious investment. Works and days [of Hesoid] were offered us, and we took works.”

“We owe to books those general benefits which come from high intellectual action. Thus, I think, we often owe to them the perception of immortality. They impart sympathetic activity to the moral power.”

“Since everything in nature answers to a moral power, if any phenomenon remains brute and dark, it is that the corresponding faculty in the observer is not yet active.”

“Meantime we hate sniveling. I do not wish you to surpass others in any narrow or professional or monkish way. We like the natural greatness of health and wild power. I confess that I am as much taken by it in boys, and some-times in people not normal, nor educated, nor presentable, nor church-members, — even in persons open to the suspicion of irregular and immoral living, in Bohemians, — as in more orderly examples. For we must remember that in the lives of soldiers, sailors and men of large adventure, many of the stays and guards of our household life are wanting, and yet the opportunities and incentives to sublime daring and performance are often close at hand. We must have some charity for the sense of the people, which admires natural power, and will elect it over virtuous men who have less. It has this excuse, that natural is really allied to moral power, and may always be expected to approach it by its own instincts. Intellect at least is not stupid, and will see the force of morals over men, if it does not itself obey.”

“I believe in the closest affinity between moral and material power. Virtue and genius are always on the direct way to the control of the society in which they are found. It is the interest of society that good men should govern, and there is always a tendency so to place them.”

“These forces are in an ascending series, but seem to leave no room for the individual; man or atom, he only shares them; he sails the way these irresistible winds blow. Intellect and morals appear only the material forces on a higher plane. The laws of material nature run up into the invisible world of the mind, and hereby we acquire a key to those sublimities which skulk and hide in the caverns of human consciousness. And in the impenetrable mystery which hides—and hides through absolute transparency— the mental nature, I await the insight which our advancing knowledge of material laws shall furnish!”

Carlyle | Soul
In Aug 1833, Emerson sat down with Thomas Carlyle and “talked about the immortality of the soul”. [6]

Atheism | Religion
In 1836, he proclaimed “make your own Bible” (Ѻ); in 1841, in his Essays, his second book, is found his essay “Self-Reliance”, described by his aunt as “strange medley of atheism and false independence” (Ѻ); listed in CelebAtheists.com (Ѻ); one of the promulgators of the godless Goethean calendar.

“Fuller had read German books, and, for the three years before I knew her, almost exclusively: Lessing, Schiller, Richter, Tieck, Novalis, and, above all GOETHE. It was very obvious, at the first intercourse with her that the last writer—food or poison—the most powerful of all mental reagents—the pivotal mind in modern literature—for all before him are ancients, and all who have read him are modern—that this mind had been her teacher, and, of course, that place was filled, nor was there room for any other. She had that symptom which appears to all the students of Goethe.”

A truncated version of the above is as follows:

“All before Goethe are ancients, and all who have read him are modern.”

This logic forms the basis the Hmolpedia-introduced BG/AG dating system.

Other
American physicist Bruce Lindsay claims that Emerson’s 1841 essay “Compensation” has something to do and or exemplifies energy conservation or the first law of thermodynamics; this, to note, seems to be speculative anachronism. [4]

“The genius of humanities is the right point of view of history. The qualities abide; the men who exhibit them have now more, now less, and pass away. Once you saw phoenixes: they are gone; the world is not therefore disenchanted. The vessels on which you read sacred emblems turn out to be common pottery; but the sense of the pictures is sacred, and you may still read them transferred to the walls of the world. Once they were angels of knowledge and their figures touched the sky. Then we drew near, saw their means, culture and limits; and they yielded their place to other geniuses.”

“In every work of genius, we recognize our own rejected thoughts; they come back to us with a certain alienated majesty.”

“Christianity dwells with noxious exaggeration about the person of Jesus.”

“Come no chimeras! Let us go abroad; let us mix in affairs; let us learn and get and have and climb. Let us have to do with real men and women, and not with skipping ghosts.”

“The laws of force apply to every form of [nature]. The husbandry learned in the economy of heat or light or steam or muscular fibre applies precisely to the use of wit. What I have said of the inexorable persistence of every elemental force to remain itself, the impossibility of tampering with it or warping it, — the same rule applies again strictly to this force of intellect, — that it is perception, a seeing, not making, thoughts. The man must bend to the law, never the law to him.”

“Animal instincts guide the animal as gravity governs the stone.”

“No force but is his force. He does not possess them; he is a pipe through which their currents flow. If a straw be held still in the direction of the ocean-current, the sea will pour through it as through Gibraltar. If he should measure strength with them,
if he should fight the sea and the whirlwind with his ship, he would snap his spars, tear his sails, and swamp his bark; but by cunningly dividing the force, tapping the tempest for a little sidewind, he uses the monsters, and they carry him where he would go. Look at him; you can give no guess at what power is in him. It never appears directly, but follow him and see his effects, see his productions. He is a planter, a miner, a shipbuilder, a machinist, a musician, a steam-engine, a geometer, an astronomer, a persuader of men, a lawgiver, a builder of towns, — and each of these by dint of a wonderful method or series that resides in him and enables him to work on the material elements.”

“Warmed by the sun, and so of every element; he walks and works by the aid of gravitation; he draws on all knowledge as his province, on all beauty for his innocent delight, and first or last he exhausts by his use all the harvests, all the powers of the world. For man, the receiver of all, and depositary of these volumes of power, I am to say that his ability and performance are according to his reception of these various streams of force. We define ‘genius’ to be a sensibility to all the impressions of the outer world, a sensibility so equal that it receives accurately all impressions, and can truly report them without excess or loss as it received.”

“I delight in tracing these wonderful powers, the electricity and gravity of the human world.”

“He is his own apprentice, and more time gives a great addition of power, just as a falling body acquires momentum with every foot of the fall.”

“He sees the grandeur of justice, the victory of love, the eternity that belongs to all moral nature. He does not then invent his sentiment or his act, but obeys a pre-existing right which he sees. We arrive at virtue by taking its direction instead of imposing ours.”


“The forces are infinite. Everyone has the might of all; for the secret of the world is that its energies are solidaires; that they work together on a system of mutual aid, all for each and each for all; that the strain made on one point bears on every arch and
foundation of the structure. But if you wish to avail yourself of their might, and in like manner if you wish the force of the intellect and the force of the will, you must take their direction, not they yours.”

“This world belongs to the energetical.”