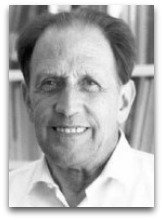 In existographies, Ramon Margalef (1919-2004) (CR:3) was a Spanish ecologist noted, in ecological thermodynamics, for his 1950s to 1960s application of a mixture of information theory and thermodynamics in the study of ecological systems. [1]

Overview
In 1957, Margalef, in his Information Theory in Ecology, his seminal publication, advocated the application of information theoretical methods to the study of species diversity in ecosystems. [2]

In 1968, Margalef, in his Principles in Ecological Theory, states:

“An ecosystem is a self-regulating, adaptive cybernetic system: it tends to remain in the most stable of all possible states permitted by its dynamic structure. The structures with stability through time are those most able to influence the future with the least expense of energy—including the energy required to possess and store information. Information is anything that can influence and shape the future.”

In 1980, Margalef, in his Biosphere between Thermodynamics and Game, defines living systems as energetic systems, in the context of the postulate that the transmission of "information", which he things is "closely linked to other physical properties of the universe" (pg. 18), can act to organize huge amounts of matter, along the way employing the far-from-equilibrium model, fluctuations, and other seeming melting pot theories.

In his work, he makes the distinction between exosomatic energy, as that which helps maintain life and the organization of ecosystems, but which neither flows though nor gets debased in the changes of somatic metabolism, and endosomatic energy, as energy that feeds the internal metabolism of organisms. [4]

Education
Margalef was a “curiosity-driven self-taught naturalist” who became one of the leading ecologists of the 20th century. (Ѻ)