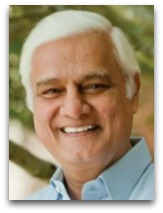 In hmolscience, Ravi Zacharias (1946-) is an Indian-born Canadian-American Christian apologist noted for his 1990s to present intellectual assault on atheism, a well-honed step above what he calls the "backyard stuff" of the new atheists.

Overview
In 1990, Zacharias penned his The Real Face of Atheism, born from a presentation to a group of scientists from Bell Labs on the topic of "Why I am not an Atheist" as a response to Bertrand Russell's "Why I am not a Christian", wherein he attempts to do battle with reductionism.

Reductionism | First cause
In 1990, Ravi, in his The Real Face of Atheism, on reductionism, amid his "first cause" chapter, cites the following quotes:

“Whence came the hydrogen? Is it any less awe-inspiring to conceive of a universe created of hydrogen with the capacity to evolve into man, than it is to accept the creation of man as man?”

“The ultimate aim of the modern movement in biology is in fact to explain all biology in terms of physics and chemistry.”

Ravi concludes, however, that this approach is a dead end; commenting the following:

“The turning of hydrogen into thinking and purposive beings is scientifically undemonstrated, and philosophically devoid of merit.”

In 2008, Zacharias, in his The End of Reason, in respect to atoms that think, commented on Voltaire's 1755 Poem on the Lisbon disaster, wherein Voltaire refers to himself as "thinking atoms" [4]

Incoherent atheism
In 2013, Zacharias, in his “The Incoherence of Atheism” lecture, opened to the following:

“Did you hear of the guy who woke up one morning and told his wife that he thought he was dead? His wife said ‘no you’re not dead, you’re talking to me’. He said ‘no I’m dead’. She really couldn’t reason with him for that long, so she sent him to a bunch of doctors, to get rid of him [him help]; but he came back every day said ‘know I’m dead.’ So finally she put him touch with a bunch of psychiatrists, who sat as team, and their only goal was to convince him of one thing, namely ‘only living people bleed, only living people bleed.’ So they went with projectors and overheads and all sorts of data and he just sat there. But finally after getting fed up with this, after two or three days, he replied ‘ok, I’ll grant you, that only living people bleed.’ One of the psychiatrists had a pin hidden in his pocket and plunged it into this man’s arm and he blood came spurting out and he looked at the blood and he exclaimed “great Scott! I guess dead people bleed too!

To some people, no amount of evidence will convince them to a contrary position. I want you to know that when you’re dealing with the subject that I’m dealing with this morning, namely the ‘incoherence of atheism’, I’m not kidding with the title, it is a totally incoherent world view, at its core, at its foundation, and yet the west keeps flirting with the idea that maybe we are the random product of time plus matter plus chance. We just happen to be happen to be here.”

First dentistry was painless.
Then bicycles were chainless,
Carriages were horseless,
And many laws enforceless.
Next cookery was fireless,
Telegraphy was wireless,
Cigars were nictotineless,
And coffee caffineless.
Soon oranges were seedless,
The putting green was weedless,
The college buy was hatless,
The proper diet fatless.
New motor roads are dustless,
The latest steel is rustless,
Our tennis courts are sodless,
Our new religion-godless [godless religion].

He then goes onto the Friedrich Nietzsche madman parable; which is well-presented. [2] Zacharias then, following some dialogue, goes into the following, namely the argument that lack of morality and meaning in the atheist world view are the two main things that make it incoherent:

“Knowledge is a deadly friend. When no one sets the rules. The walls on which the prophets wrote are cracking at the seams. Where do we find an objective transcendent point of reference for good and evil? As far as I’m concerned, atheism dies the death of a thousand qualifications, even prompting Richard Dawkins to make the comment once that he actually wondered if there was such a thing as evil? Why? Because the logic of his philosophy prompts him to raise the question. Evil is just, you know, we call one thing blue, another thing yellow, we call this good, we call this bad, it is nothing more than an aesthetic difference. It’s got nothing to do with moral law. There is no moral law in atheism, which makes it incoherent. They can be ‘good’, but without any rationally compelling reasons for why. Secondly, there is no ultimate point of reference for meaning. There’s no ultimate point of reference for meaning.”

“Nietzsche was no ordinary guy. He was a genius. In his ‘Parable of the Madman’, the idea was that if ‘god is dead’, we’re going to have to come up with definitions of what it means to be human, and what it means to be good, or wicked, and so on. The incredible breadth of understanding, one has to at least give him the credit that at least he knew the ramifications of what he had done. Modern day guys like Richard Dawkins, and the like, they are sort of playing at backyard stuff compared to the philosophical sophistication of a person like Nietzsche, who knew he had to evaluate what these things involve.”

In 2015, Dawkins tweeted (Ѻ) proudly a video purporting that Zacharias was never a “visiting scholar at Cambridge”, playing the credentialism game (a loser’s move).

Quotes | By
The following are quotes by Zacharias:

“There’s a new atheism movement taking root in America, a movement more powerful and subversive than the atheism of Madalyn O’Hare in the 1950s and 1960s. Led by writers such as Richard Dawkins, Christopher Hitchens, and Sam Harris, this new challenge to Christianity—or any belief in god—has a smooth and easy appeal to a new generation of Americans.”