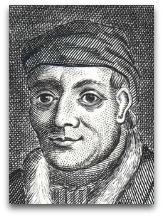 Overview
In 1447, Regiomontanus, aged 11, characterized a “genuine child prodigy”, was sent to the University of Leipzig, where he studied for three years, during which time he constructed astronomical tables.

In 1450, Regiomontanus transferred to the University of Vienna.

In 1454, Regiomontanus, aged 18, became a student of Georg Peurbach (1423-1461), a University of Vienna humanities professor, who after having begun to record observations of the heavens (1451), started to give astronomy lectures, generally aimed at publishing a corrected version of Ptolemy’s Aristotle-based Almagest (150AD), the then-standing standard astronomy text.

Ptolemy | Moon
In 1496, Regiomontanus' Epitome of the Almagest, was published posthumously, wherein he states that Ptolemy's theory of the motion of the moon could not be correct. [1]

Copernicus
In 1490, Regiomontanus published Table of Directions, which enabled astronomers to determine the position of heavenly bodies based on the perceived daily rotation of the night sky; this was one of the first books owned by Nicholas Copernicus.

Quotes | By
The following are quotes by Regiomontanus:

“You, who wish to study great and wonderful things, who wonder about the movement of the stars, must read these theorems about triangles. Knowing these ideas will open the door to all of astronomy and to certain geometric problems.”

— Regiomontanus (1464), On Triangles of Every Kind (De Trianguis Omnimodis) (Ѻ)