In hmolscience, relationship force is the force that brings and holds humans together in relationships, e.g. friendships, marriages, or families, or forces them out, in a reverse manner; a combination of the workings of the electromagnetic force and gravitational force, generally operating via an exchange force mechanism or bosonic connection.

Overview
In 450BC, Empedocles asserted that the relationships were held together via the operation, in some way, of two forces: love and hate.

“As amber attracts a straw, so does beauty admiration, which only lasts while the warmth continues.”

In 1809, Goethe, building on Burton, in part, supposedly, scripted his human chemical theory, according to which the chemical "force" of elective affinity is what holds people together in relationships, attached, conceptually via Cullen bonding brackets: (Ѻ) 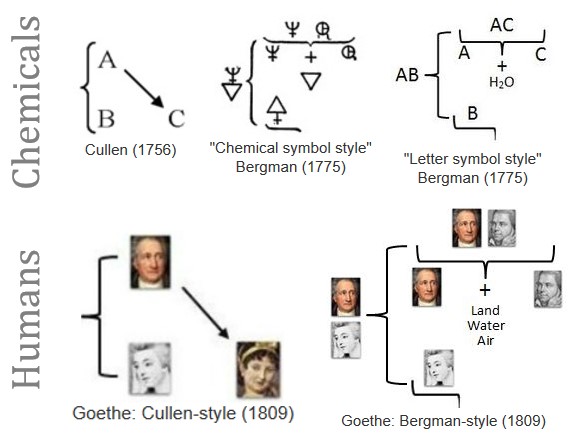 A read-through of William Cullen, however, is requisite, in respect to what "force" he had in mind, in the symbolic usage of his bonding bracket, or "crochet" as he called it, as the means of representing the union of the two attached chemicals.

In 1910, Henry Bray, building on Goethe, via the Ernst Haeckel formulation of Goethe's human elective affinities theory, began to state indirectly that the "force" that holds people together in relationships, as in chemical attachments, was "love or affinity" (see: love terminology upgrade), a interesting term vacillation:

“The force which presides over chemical combinations, is called chemical affinity; and it is in the exhibition of this that atoms act so much like the forms of higher organisms. To illustrate: oxygen has but little affinity or atomic love, call it which you please, for copper, under general conditions; but as in the case of higher beings when you array them in their best, and make them as alluring as possible, so here,—if you heat the copper in the air oxygen will immediately rush to it, and with it form oxide of copper [Cu2O]. Their affinity for each other is now so great that they cannot be divorced, under ordinary circumstances. But even now if you mix this oxide with powdered charcoal, and then heat the mixture, a moment arrives when the affinity of the charcoal for the oxygen is greater than that of the copper, causing the oxygen to forsake the copper and unite with the charcoal to form carbonic acid [H2CO3]. The allurements of the charcoal suffice at last to cause the oxygen to leave its first love, and go with its new affinity.”

“We see similar action often in the case of men and women. Again, the attraction of hydrogen [H2] for oxygen [O2] is very great under ordinary circumstances, causing them to live in the greatest harmony, as, for instance, in water [H2O]; but as at times a third party is seen to insinuate himself into a household, destroy its peace, and ultimately break up its union, so here if an atom of potassium [K], for instance, finds its way into a molecule of water, the peace of the molecular family is at once destroyed and jealousy and a murderous quarrel ensue, the metal burning brightly, and darting hither and thither on the surface of the water, exulting as it were in the mischief it works. In this contest of atomic affinity or love, the potash wins the day [H2O + K → KOH + H2], taking away with itself two blushing damsels for its harem, and leaving an atom of hydrogen [H2] like the last rose of summer to droop and die of a broken heart.”

In 2005, Libb Thims, in his “On the Nature of the Chemical Bond”, a draft article—which, to note, transformed into the two volume textbook Human Chemistry (2007), being that the article would no longer fit on one webpage—attempted to ferret out the nature of the mechanism and composition of the human chemical bond in terms of forces; the opening abstract of which is as follows: [2]

“What variation of chemical bond holds such human molecules together in the most essential of all unions: bonded matrimony? To clarify, statistically it is known that 85% of people will inter into, and be transformed though the following chemical reaction [3]:

where Mx equals male human molecule, Fy equals female human molecule, MxFy equals bonded 'couple', and Bc equals child. Moreover, according to the latest US Census Bureau data sets, 43% of all marriages MxFy will end, i.e. fission, by the 15-year mark; better known as divorce or dissolution of marriage:

The question remains, regarding the bonded structure 'married couple', which of the four fundamental forces is presently operating to enable such ubiquitous bonds? More broadly, when a person has a relationship with another person, what force constitutes the 'glue' of that union:

In this article, out of necessity, we will outline a robust and cogent theoretical model of inter-human bonding, as based on the standard model and its mode of operation, being workable and testable in composition, thus facilitating the peer-review process of either validation or disproof of its principles.”

The general issue here, at this point in Thims' mind, as a newly-minted chemical engineer and electrical engineer, is that no one, to his knowledge, in history prior to him, had ever worked out the "nature" of the bond between humans, in terms of the fundamental forces, the way Gilbert Lewis (1902) worked out his electron pair dot structure model of the covalent bond, e.g. H:H for the attachment of two hydrogen atoms in the bound state of the hydrogen molecule H2; or the way Walter Heitler (1927), after awaking from a series of naps, conceived the basic model of the exchange force or "perturbation theory" operating between two hydrogen atoms, the outline of which was first published in “Interaction of Neutral Atoms and Homopolar Bonding according to Quantum Mechanics”, co-authored with Fritz London (1900-1954); or the way Linus Pauling (1939) published his monumental textbook The Nature of the Chemical Bond, which he dedicated to Lewis, therein outlining his hybrid orbital model of chemical bonding, an huge near two millennium upgrade to the hook-and-eye bonding model, which he was taught as an undergraduate chemical engineer in 1917 at Oregon Agricultural College.