In terminology, religion, from Latin ligare "to bind" (Ѻ), in the sense of ‘binding together’ (Sagan, 1985), is any ideology and system of teachings that explain and guide human existence and behavior; generally through ancient stories, parables, commandments, and postulated existences of one god, gods, lesser gods, supreme gods, and or higher powers; the majority of which, in ancient religio-mythology composition, been astro-theology rooted. [6]

Overview
The following is a relevant synopsis-themed overview:

“Re (0:50): ‘when black people were taken from Africa to America … they were forcefully converted to Christianity’, this reminds me of Greydon Square:

‘Spoon fed this religion from the slave ship. They used faith to justify bringing slaves here. All the conducts and the rules in the good book. You swear by it, but failed to take a good look. You’re completely sold. Just two centuries ago slave owners swore you didn’t even have a soul. Now you blindly defend a faith, that was used to plunder pillage and rape a whole entire race.’

The irony here is that Christianity is an African religion, namely the Osiris anointed (i.e. “christened” with resurrection oil) branch of the father Ra born out of the keme (-ham), i.e. black fertile soil (“Egyptian” or Kamite), following the flood (Ab-) belief system of Heliopolis, and their Nile river flood pyramid rising creation myth, aka the Ab-ra-hamic faiths (or Anunian theology). [Ѻ] Therefore, a person complaining about being spoon-fed their own cooking is a bit humorous, reminiscent of the witty Alan Watts: ‘Anybody who tells you that he has some way of leading you to spiritual enlightenment is like somebody who picks your pocket and sells you your own watch.’ Whatever the case, the taste of the cooking was so good that we all ended up eating some of the stew; resultantly, 75 percent of the modern world still eats that same cooking of Abraham (Christian/Islam name for Ra) or Brahma (Hindu name for Ra), all the children of the world arguing (i.e. going to war) with each other about who has the better recipe.”

World religions | Ra classified
The following show the sub-branches of the "Father Ra Born of Nun" (Abrahamic/Brahmaic) faith based religions that currently dominate the mindsets of 72% of the modern world, otherwise known in ancient days as Anunian theology or Ra theology (aka Egyptian mythology):

Life | Death theories
It should be noted that Neanderthal thinkers, 70,000-years ago, had ideas on life, death, and some version of continued life, owing to the fact that they buried their dead with food, artifacts, and red ochre.

In modern-day thinking, the Egyptian-version of what gives life, is the modern influence to the majority of people, owing to the 72-percent world belief in Ra-theology, in which breath, wind, or wings flapping, sent from the ankh, etc., was said to give life to a dead body.

The most-quote Bible verse, to exemplify, is John 3:16 (c. 90AD), which states that “that whosoever believeth in him should not perish, but have eternal life,” which signifies that 33 percent of the modern world wants eternal life. The basis of this quote is the Osiris resurrection theory (c. 2500BC), the world’s first mummy, and the Egyptian theory of the afterlife.

Science
Modern science is slowly replacing the outdated theories of religions, although not without conflict. Of these sciences, those of human thermodynamics, human chemistry, and human physics are in direct conflict with various core teachings of religions, e.g. free will, evolution, life, death, afterlife, morality, etc., and in this sense are acting as modern replacements for the tenets of latter; albeit, not without heated debated often infused with emotional discussion.

First law | bond energy
In the context of a world belief in the theory of the soul, when one attempts to explain that modern theory discerns that each person is molecule, the first question that comes to mind is the objection that: "but, I have a soul, that may go to the afterlife, and that this process is under the governance of God."

The modern interpretation of this, i.e. how life, death, and universal continuity, connect to one another, according to modern science, can only be studied through or in the context of the first law of thermodynamics, in which the death (cessation) of a person is quantified by changes to the internal energy of one's thermodynamic system and the transformation of this energy or interaction at the boundary of the system. This type of logic is studied in cessation thermodynamics, which theorizes about post-cessation transformations of human chemical bonds and the human molecular bond energy, remaining as this residual energy signature, and how this resides or transforms remaining and connected (coupled) systems and those human molecules contained therein.

What happens when you die?

See main: What happens when you die?

The following table shows religious views on death ranked by world population adherence, based on data from the 2002 Time Almanac:

Religious texts
The following is a chronological table of the ancient religious texts germane to development of modern practiced religions: 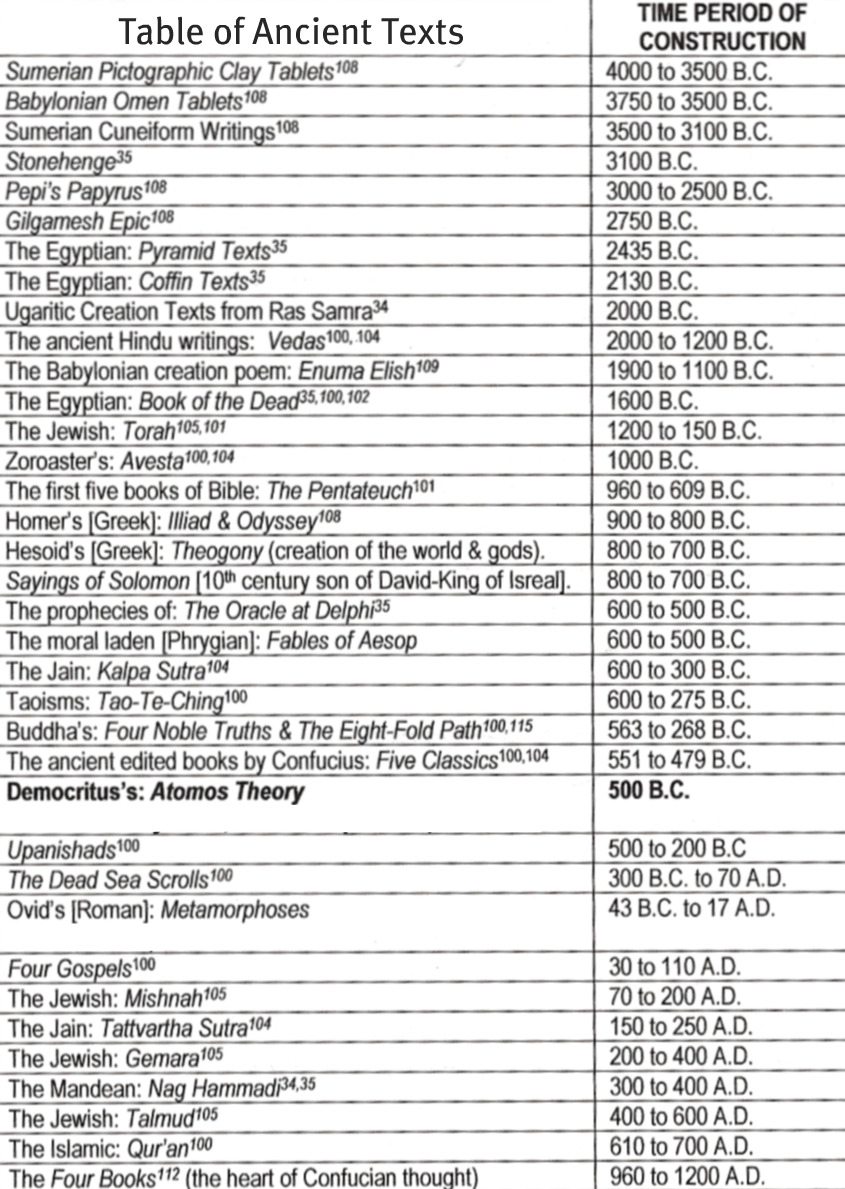 “Religion is the daughter of virtuous action.”

“We will establish our religion by the sword. We will trample down our enemies and make them one gore of blood from the Rocky Mountains to the Atlantic Ocean. I will be to this generation as a second Mohamed whose motto in treating for peace was ‘the Quran or the sword’. So it shall be with us.”