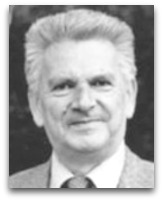 Overview
In 1970s, Thom invented “catastrophe theory”, which was posited to give an understanding of how sudden changes in society might be provoked by small effects. [1]

Jaynes
In 1991, Edwin Jaynes, in his “How Should we Use Entropy in Economics”, outlined how Willard Gibbs’ 1973 graphical thermodynamic ideas, such as entropy convexity, can be mixed with logarithmic interpretations of economic entropy, following equation, e.g. multiplicities and macroeconomic states:

and connected in some way to French mathematician Rene Thom’s 1960s catastrophe theory, and the thermodynamics of ferromagnetism and the Curie temperature. [1]

Quotes | By
The following are quotes by Thom:

“Catastrophe theory is, quite likely, the first coherent attempt (since Aristotelian logic) to give a theory on analogy. When narrow-minded scientists object to catastrophe theory that it gives no more than analogies, or metaphors, they do not realise that they are stating the proper aim of catastrophe theory, which is to classify all possible types of analogous situations.”