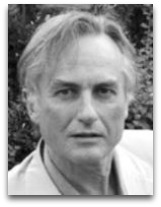 In existographies, Richard Dawkins (1941-) (IQE:165|#14) [RGM:219|1,400+] (DN:6.5) (CR:203) is an English zoologist, turned selfish genes popularizer, turned famous atheist, initiator the Dawkins scale of religious belief, who is noted for his random chance and purposeless universe model of everything.

“Comparisons often made of Jesus with Horus, Dionysus, Krishna etc. Any real scholars out there confirm each one?”

Per reason that he was “doubting the story”; which was responded by Dorothy Murdock (Ѻ), among others.

Overview
The following is Dawkins' gene-centric view of existence as summarized in the following 1991 quote: [1]

“We are machines built by DNA whose purpose is to make more copies of the same DNA. That is exactly what we are here for. We are machines for propagating DNA, and the propagation of DNA is a self-sustaining process. It is every living object’s sole reason for living.”

A number of significant difficulties exist in Dawkin's overall theory, which on one hand is a modern step above the Biblical view of existence and purpose, yet on another hand is invariably attributing a misaligned viewpoint to hard science (physics, chemistry, and thermodynamics), which is not his field of expertise (zoology).

To point out his salient difficulties: firstly, chemical synthesis is the correct name for the process by which humans came about over billions of years from hydrogen atom precursors, as first enunciated in French philosopher Jean Sales' 1798 human molecular hypothesis, not by English naturalist Charles Darwin's 1859 evolution theory, which is only a partial theory of a bigger process; secondly, a human is not a living object, but rather an animated or reactive entity; third, human chemical reactions are not self-sustaining, a process that amounts to a perpetual motion claim, but rather heat-driven; fourth, humans are not machines (human machines), which is a defunct 19th century theory, but rather molecules (human molecules); fifth, and most incorrect among his many grandiose claims, the sole reason for an animated object's existence is not "propagation of DNA", but rather a reaction path dictated by Gibbs free energy change, as these free energy differentials are coupled to the spins and heat cycles of the universe.

Christianity | Atheism
In circa 1957, Dawkins, in his mid-teens, he was led to reject Christianity, having been brought up in traditional Anglicanism, after discovering Darwin. [4] The following Darwin wasp god disproof quote seems to be Dawkins' main source of atheism fuel; being that he re-quotes this, in the form of conceptualizing nature as blind, designless, purposeless, and indifference:

“I own that I cannot see as plainly as others do, and as I should wish to do, evidence of design and beneficence on all sides of us. There seems to me too much misery in the world. I cannot persuade myself that a beneficent and omnipotent god would have designedly created the Ichneumonidae [wasp] with the express intention of their feeding within the living bodies of caterpillars, or that a cat should play with mice.”

Dawkins repeatedly reformulates this quote in his writings:

“Nature is not cruel, only pitilessly indifferent. This lesson is one of the hardest for humans to learn. We cannot accept that things might be neither good nor evil, neither cruel nor kind, but simply callous: indifferent to all suffering, lacking all purpose.”

“The universe that we observe has precisely the properties we should expect if there is, at bottom, no design, no purpose, no evil and no good, nothing but blind, pitiless indifference.”

On this last quote, American atheist turned skeptical theist Lee Strobel (2004) comments that this type of Darwin-Dawkins evolution ideology is what, in his early 20s teetered him on the atheism side of the fence, a loose anchoring in the Drake equation, i.e. in conceptualized extraterrestrial kinship, “giving him hope”, as he reflects:

“This essence of what I was taught as I studied science. Of course, these conclusions neatly bolstered my atheistic values. Somehow I managed to avoid getting too depressed by the personal implications of all of this, strangely finding hope and inspiration in the belief that we are not alone in the universe. Even if god didn’t exist, at least there were millions of advanced civilizations out there.”

In 1986, Dawkins, in his The Blind Watchmaker, seems to have begun to self-identify as an "intellectually fulfilled atheist", implicitly: [5]

“An atheist before Darwin could have said, following Hume, ‘I have no explanation for complex biological design. All I know is God isn’t a good explanation, so we must wait and hope that somebody comes up with a better one.’ I can’t help feeling that such a position, though logically sound, would have left one feeling pretty unsatisfied, and that although atheism might have been logically tenable before Darwin, Darwin made it possible to an intellectually fulfilled atheist.”

Dawkins, here, to note, obviously did know Goethe, nor seem to be aware that Darwin cites Goethe as being one of the three evolution theorists to have preceded him, along with his grandfather Erasmus Darwin (1791), and Etienne Saint-Hilaire (1833)

“The more you understand the significance of evolution, the more you are pushed away from an agnostic position and towards atheism.”

In 2005, Dawkins, at a time when his God Delusion was still in the drafting stage, was being referred to as the "world’s most famous out-of-the-closet living atheist". (Ѻ)

In 2006, Dawkins published his The God Delusion, one of the more talked about books in the recent "new atheism" movement in the early 21st century.

Blind | Accident | Chance
In 1986, Dawkins published his The Blind Watchmaker, titled in opposition to William Paley's watchmaker argument, wherein he argues that natural selection is the unconscious, automatic, blind, purposeless, non-random process discovered by Darwin; the gist of which can be summarized by the following Dawkinean logic, based on the respective number of times he uses each term throughout his book: [3]

Dawkins, in the adjacent clip (3:16-3:40), states that no evolutionist that he has ever met claims that evolution happens by accident.

Purposeless universe theory
Dawkins came to fame with his 1976 book The Selfish Gene, in which he argued that genes are selfish and focal point of evolution; he followed this up with his 1986 book The Blind Watchmaker, in which he argued for the view that humans were not created by God, but by blind random purposeless chance; his 2006 book The God Delusion, takes aim at the theory of god, arguing that god does not exist and that religion is a delusion.

On morality
Dawkins system of morality amounts, it seems to a gene-based kin selection ideology, in short.

It is not difficult to find him contradicting himself, as he does with "accident" (above), in respect to whether or not he believes that "good" and "evil" exist in the universe (as shown adjacent).

Difficulties on theory
Dawkins’ overall polemic is that his selfish-genes argument is about altruism, as he has said in recent videos, but that many have misinterpreted this implicit argument. In any event, the following is his main area of difficulty:

“We are survival machines—robot vehicles blindly programmed to preserve the selfish molecules known as genes.”

Supposedly, Dawkins’ aim here was to repackage Hamilton kin selection rule in the form of a selfishness argument. Whatever the case the errors here are the use of the terms: ‘blind’ and ‘selfish molecule’. Molecules are neither blind nor are they selfish (Ѻ), these are what are called "molecular anthropisms".

Education
Dawkins completed his BS (1962), MA, and PhD (1966) in zoology at Oxford University under animal behavior theorist Nikolaas Tinbergen. Dawkins was an assistant professor of zoology at University of California, Berkeley from 1967 to 1970, after which he returned to Oxford, becoming a zoology professor there.

“In a universe of electrons and selfish genes [A], blind physical forces [B] and genetic replication, some people are going to get hurt, other people are going to get lucky [C], and you won’t find any rhyme or reason [D] in it, nor any justice [E]. The universe that we observe has precisely the properties we should expect if there is, at bottom, no design [F], no purpose [G], no evil [H] no good [I], nothing but pitiless indifference.”

“Darwinism is not a theory of random chance. It is a theory of random mutation plus non-random cumulative natural selection. . . . Natural selection . . . is a non-random force, pushing towards improvement. . . . Every generation has its Darwinian failures but every individual is descended only from previous generations' successful minorities. . . . There can be no going downhill - species can't get worse as a prelude to getting better. . . . There may be more than one peak.”

— Richard Dawkins (2006), “What if You’re Wrong?”, response to Randolph College student query, Oct 23; variant of statement (pg. 25) in The God Delusion (2004); favorite quote of Angela Jabari (2016) in her "twenty smartest atheists" list; variant of what was originally stated by Michel Montaigne (Essays, 1580) (see: religion as a function of birthplace) [11]