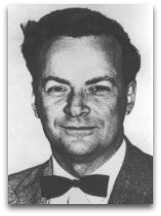 Feynman on love
In 1946, sixteen months after Feynman’s wife, Arline Feynman, died (de-existed), at age 25, from tuberculosis, Feynman wrote a curious letter to his wife, which remained sealed until his death (dereaction) in 1988.

“In those days, in Far Rockaway, there was a youth center for Jewish kids at the temple. Somebody nominated me for president of the youth center. The elders began getting nervous, because I was an ‘avowed atheist’ by that time. I thought nature itself was so interesting that I didn’t want it distorted like that [by miracle stories]. And so I gradually came to disbelieve the whole religion.”

In 1946, at his father’s funeral, know that his father was atheist, and that he was, refused to take part in a mourner’s prayer in praise of god. In his 1963 Danz lecture turned book The Meaning of It All, was self-classifying himself, in a beat around the bush manner, as being grouped with his fellow "atheistic scientific colleagues".

In 1963, Feynman, in his The Meaning of It All, Danz lecture turned book, when he began to engage into the bigger "meaning" and "morality" terrain, stated to the effect that he was an atheist, then vacillated, slightly, on the question as to whether or not it is possible to "disprove the existence of god", a phrase he repeated some four times; the last of which was the following statement:

“It is not possible to disprove the existence of god, as far as I know.”

Atoms | Animals
In 1961 to 1963, Feynman gave his famous lectures on physics series at Caltech to undergraduates. In the opening lecture, “Atoms in Motion”, he outlined what has come to be know as reductionism par excellence, the following being a popular human physics themed quote:

“Everything is made of atoms. That is the key hypothesis. Everything that animals do, atoms do. There is nothing that living things do that cannot be understood from the point of view that they are made of atoms acting according to the laws of physics.”

Feynman on beauty
In 1981, during Christopher Sykes’ now-celebrated “The Pleasure of Finding Things Out” interview documentary of Feynman—originally conceived to be done on Freeman Dyson, who but deflected the interview to Feynman, whom he considered (V) far more interesting—Feynman talked about the beauty of a flower, from a scientist’s purview and an artist’s perspective. (Ѻ) (V)

Education
In grade school, Feynman infamously scored 125 on an IQ test; a finding which, along with Henri Poincare, who scored at the imbecile level on an IQ test, is often cited as case in point in regards to the ability to be able to test for genius recognition.

As a child, Feynman’s father—a military uniform salesman—would sit young Feynman on his lap and read to him from the family’s Encyclopedia Britannica, stopping and pausing along the way, to explain, e.g. how a six foot wide dinosaur head would not be able to fit through the family window.

As a teenager, or at least by age 19, Feynman was reading Paul Dirac's 1930 The Principles of Quantum Mechanics. [7]

In college, and not until he was older, Feynman explicitly avoided taking humanities classes, as much as possible, expect where required. (V)

In 1939, Feynman completed his BS at MIT, during which year, as a senior, he had the highest score in the nation on the Putnam; he supposedly had a standing bet that he could solve any problem to within 10% within 60 seconds; and some have suggested his non-verbal IQ was greater than 190. (Ѻ)

Feynman attained a perfect score on the graduate school entrance exams to Princeton University in mathematics and physics—an unprecedented feat—but did rather poorly on the history and English portions. Attendees at Feynman's first seminar included Albert Einstein, Wolfgang Pauli, and John Neumann. He received a PhD from Princeton in 1942; his thesis advisor was Wheeler, and Wheeler and Eugene Wigner were the examiners of his thesis.

Quotes | On
The following are quotes on Feynman:

“Feynman is a second Dirac, only this time human.”

“[Feynman] begins working calculus problems in his head as soon as he awakens. He did calculus while driving in his car, while sitting in the living room, and while lying in bed at night.”

“In these days of specialization there are too few people who have such a deep understanding of two departments of our knowledge that they do not make fools of themselves in one or the other.”

“I do believe there is a conflict between science and religion.”

“Today we cannot see whether Schrodinger’s equation contains frogs, musical composers, or morality. We cannot say whether something beyond it like god is needed, or not. And so we hold strong opinions either way.”

“I would like to again impress you with the vast range of phenomena that the theory of quantum electrodynamics describes: It’s easier to say it backwards: the theory describes all phenomena of the physical world except the gravitational effect, the thing that holds you in your seats (actually, that’s a combination of gravity and politeness, I think), and radioactive phenomena, which involve nuclei shifting in their energy levels. So if we leave out gravity and radioactivity (more properly, nuclear physics), what have we got left? Gasoline burning in automobiles, foam and bubbles, the hardness of salt or copper, the stiffness of steal. In fact, biologists are trying to interpret as much as they can about life in terms of chemistry, and as I already explained, the theory behind chemistry is quantum electrodynamics.”

“I don’t know what the fuss is all about—Dirac did it all before me.”

Further reading
● Feynman, Richard. (1956). “The Relation of Science and Religion”, Engineering and Science Magazine; talk given at Caltech YMCA Lunch Forum, May 02.