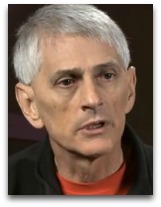 In hmolscience, Richard Kilburg (1946-), aka “Dick Kilburg”, is an American leadership psychologist noted for []

Overview
In 2014, Kilburg, in his “Leadership and Organizational Behavior: a Thermodynamic Approach”, co-authored with American chemical engineer Marc Donohue, the focal article of 12-author 10-article special edition of Consulting Psychological Journal: Practice and Research, focused on “The Physics of Leadership and Organizational Structure”, or mathematical psychophysics, as they deem it, presented a study that details a model of leadership and organizational structures that parallels thermodynamics applied to states of matter; the following is the abstract: [1]

“This study presents a detailed model of leadership and organizational structures that parallels well-known principles of thermodynamics as they are applied to states of matter. Four types of organizational structure are explored with an emphasis on hierarchical institutions in and with which consulting psychologists spend most of their time. The model describes three types of bonding forces based on parasympathetic and sympathetic nervous system arousal and cognitive attributions of respect that parallel those in atomic and molecular physical systems and demonstrates conceptually how variations in their presence and strength create different organizational structures. The application of these forces by leaders, followers, and other stakeholders to the creation and maintenance of human hierarchies is explored in depth. Issues and challenges that the model presents for consulting and organizational psychology are discussed. It is suggested that if the model can be validated by additional research efforts, classical psychophysics may be extended to new domains and that mathematical principles may be developed that can be broadly tested and applied to aspects of leadership and organizational behavior as they have been historically for various social, physical, and chemical systems.”

Kaiser
Robert Kaiser, in the primer article “Beyond Physics Envy? An Introduction to the Special Issue”, refers to physics envy, and opens to a mention that British philosopher Gilbert Ryle (1900-1976), as Stokes 100 (#87), was an antidualism philosopher. [3]

Avolio
American business leadership scholar Bruce Avolio (Ѻ), in the second commentary article “Examining Leadership and Organizational Behavior Across the Boundaries of Science”, states that he examines the “thermodynamic lens” put forward by Kilburg and Donohue. [4]

“In their interesting and provocative paper, Kilburg and Donahue (2014) analyze the process of group formation using thermodynamics as a guide. On the one hand, gases turn into liquids which turn into solids depending on the forces attracting the constituent molecules. On the other hand, the authors argue, a crowd at a shopping mall can turn into a lynch mob, which can turn into a disciplined army unit depending on the forces attracting the members. And, the authors further argue, the forces that attract the members and “cause” them to cohere come primarily from the leader. Thus, they are interested in how leaders create and maintain structure and they explain this process by an analogy based on the principles of molecular thermodynamics. Two features of the essay seem worth remembering. First, the problem itself is terribly important and poorly understood. Second, as Kurt Lewin (1940) astutely noted, this kind of reasoning by analogy is crucial and indispensable.”

“Kilburg and Donohue’s (2014) article in this issue is a welcome addition to the organizational psychology literature. It attempts to address an organizational “given,” the structure of the organization itself, by borrowing insights from physics and chemistry about the forces that act on atoms to form molecules and what variations in form imply for molecular functioning. By understanding the thermodynamic energy arising from molecular forces and structure, the reader has a new appreciation and language, based in thermodynamics, for understanding organizational psychology and behavior. The authors have two goals. First, they seek to develop a set of organizational-structure models that can be tested mathematically in terms of their capacity to influence organizational performance. Second, Kilburg and Donohue claim that organizational models vary in their capacity to hold in check and maintain balance among three neuropsychic forces: the parasympathetic and sympathetic nervous systems and the tendency to offer respect by exhibiting deference to authority.”

Hazy
American business school professor James K. Hazy (Ѻ), whose specialty is management, marketing, and decision making, in the fourth commentary article “Is this ‘Thermodynamic Inquiry’ Metaphor or More?”, give the following abstract:

“There is no reason to get out your old textbooks. A few minutes on Wikipedia will tell you that equilibrium is a driving concept in thermodynamics: “If two thermodynamic systems are each in thermal equilibrium with a third, then all three are in thermal equilibrium with each other” (“Laws of Thermodynamics,” n.d.). Furthermore, one learns that since energy is conserved, the first law of thermodynamics says that the internal energy of a system must change as heat flows into or out of it. The second law tells us that the entropy (i.e., randomness or “disorder”) of an isolated system (one where nothing, not even energy, flows in or out) never decreases and that all such systems tend spontaneously toward the state of maximum entropy or disorder. The third law requires that the entropy of a system approaches a constant value as temperature approaches absolute zero. The question posed in this commentary is whether Kilburg and Donohue (2014) use these and related ideas to offer an elaborate metaphor about leadership and organization behavior or perhaps have uncovered something more.”

“The article by Kilburg and Donohue (2014) emanates from a very intriguing premise: that one can draw from principles of molecular thermodynamics to develop a parallel science of the psychophysics of leadership and organizational structure. The authors use the four primary states of matter (solids, liquids, gases, and plasma) as a means for examining how bonding forces and phase behavior of atoms and molecules can extend theorizing about the emotional forces of human behavior and organizing. They also intrigue us with the idea that we can use these concepts to advance a mathematically formulated scientific model for social organizing behavior. These are ambitious goals, and the authors point us in interesting new ways of thinking about research in leadership and organizational behavior. In this commentary, we discuss thoughts triggered for us by the core assumptions used in this analysis, areas of future research that could emanate from this line of thinking, and our impressions about whether this point of view resolves any debates, confusion, or questions.”

Education
Kilburg completed his PhD in clinical psychology in 1972 at the University of Pittsburgh. [2]