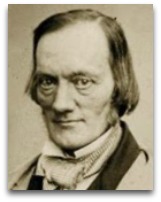 In existographies, Richard Owen (1804-1892) (EvT:14|21+) (CR:9) was an English anatomist noted, in evolution thermodynamics, for his 1840s evolution theory that life had an “organizing energy”, which he adopted from Johannes Muller's vitalism theories, albeit one divinely designed, that controlled its development and evolution, operating in such a way that each species, e.g. horse, humans, spiders, belonged to an “immutable archetype”, such that evolution within an archetype was possible, but not between archetypes. [1] This accounted for fossil evidence of horse-like creatures evolving over millions of years from dog-sized forest animals. Owen attempted to prove that species crossover could not occur by citing evidence, later shown to be false, that the hippocampus structures of the human and gorilla were somehow inseparably different.

Organized energy
In 1836, Charles Darwin returned from his voyage on the Beagle, with a considerable collection of specimens, and was introduced to Owen by English geologist Charles Lyell. Owen then formulated the view that extinct giant species were evolved rodents and sloths, related to current species in the same locality. Owen then talked about his theories to German physiologist Johannes Muller, during which time Muller explained his “vitalism principle” to Owen, that living matter had an ‘organizing energy’, a life-force that directed the growth of tissues and determined the lifespan of the individual and of the species.

Nature of the Limbs
In 1841, during Owen’s visits with Darwin, his hints of disbelief in “transmutation” theory of evolution, kept Darwin quite about his hypothesis. Owen eventually published his theory in his 1849 book On the Nature of the Limbs, at the end of which he suggested that humans ultimately evolved from fish as a result of natural laws; a view that resulted in him getting criticized in the Manchester Spectator for denying species like humans were created by God. [2]

Religion
Owen eventually adopted Muller's vitalism view that life has a special "organizing energy", but added in that it must be divinely designed or created, so as to control or guide evolution and the development of life.