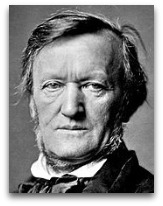 Schopenhauer | Feuerbach
In 1853, Wagner, while writing the music for The Valkyrie, the second part of the Ring cycle, he discovered Arthur Schopenhauer and was so mesmerized by The World as Will and Representation that he read if from cover to cover in spite of his work on The Valkyrie and then read it three more times within a year. Goethe-Nietzsche scholar T.K. Seung comments on this: [1]

“Schopenhauer’s philosophy drastically changed his view of life and music by destroying his Feuerbachian optimism and his revolutionary fire. He came to believe that social injustice and human suffering could never be eliminated by any political movement. He accepted Schopenhauer’s view that the whole world was a tragic play of the blind will. The injustice in Wonton’s world in The Ring is not an unfortunate mistake to be rectified, but reveals the inevitable tragic dimension of human existence. He changed from a Feuerbachian optimist and idealist to a Schopenhauerian pessimist or realist.”

Nietzsche
Wagner, supposedly, had a strong influence on Nietzsche; the following attests to this:

“In the first period (1865-1876), Nietzsche's inner life, and a good deal of his outer life, was dominated by Schopenhauer and Wagner.”