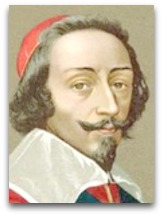 Quotes | On
The following are quotes on Richelieu:

“During the last eighteen years of the reign of Louis XIII [1625-1643], France was entirely governed by Richelieu, one of that extremely small class of statesmen to whom it is given to impress their own character on the destiny of their country. This great ruler has, in his knowledge of the political art, probably never been surpassed, except by that prodigy of genius who, in our time, troubled the fortunes of Europe. But, in one important point of view, Richelieu was superior to Napoleon. The life of Napoleon was a constant effort to oppress the liberties of mankind; and his unrivalled capacity exhausted its resources in struggling against the tendencies of a great age. Richelieu, too, was a despot; but his despotism took a nobler turn. He displayed, what Napoleon never possessed, a just appreciation of the spirit of his own time.”

“The more we study the career of Richelieu, the more prominent does this antagonism become. Every thing proves that he was conscious of a great struggle going on between the old ecclesiastical scheme of government, and the new secular scheme; and that he was determined to put down the old plan, and uphold the new one.”


“They declared that Richelieu had no religion, that he was only a Catholic in name, that he was the pontiff of the Huguenots, that he was the ‘patriarch of atheists’, and accused him of wishing to establish a schism in the French church.”

“By erecting this new standard of action, Richelieu took a great step towards secularizing the whole system of European politics. For, he thus made the theoretical interests of men subordinate to their practical interests. Before his time, the rulers of France, in order to punish their Protestant subjects, had not hesitated to demand the aid of the Catholic troops of Spain; and in so doing, they merely acted upon the old opinion, that it was the chief duty of a government to suppress heresy. This pernicious doctrine was first openly repudiated by Richelieu. As early as 1617, and before he had established his power, he, in an instruction to one of the foreign ministers which is still extant, laid it down as a principle, that, in matters of state, no Catholic ought to prefer a Spaniard to a French Protestant. To us, indeed, in the progress of society, such preference of the claims of our country to those of our creed, has become a matter of course; but in those days it was a startling novelty.”

“By thus steadily subordinating the church to the state; by enforcing the principle of this subordination, on a large scale, with great ability, and with unvarying success, he laid the foundation of that purely secular polity, the consolidation of which has, since his death, been the aim of all the best European diplomatists. While in other Christian countries, men were being incessantly persecuted, simply because they held opinions different from those professed by the established clergy, France refused to follow the general example, and protected those heretics whom the church was eager to punish. Indeed, not only were they protected, but, when they possessed abilities, they were openly rewarded.”

Quotes | By
The following are quotes by Richelieu:

“If you give me six lines written by the hand of the most honest of men, I will find something in them which will hang him.”