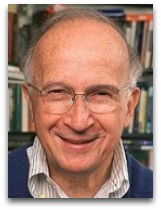 In human chemistry, Roald Hoffmann (1937-) is an American reaction theory chemist noted for []

Overview
In 1995, Hoffmann, in his The Same and Not the Same, discussed some of the theoretical content of German polymath Johann Goethe’s 1809 Elective Affinities, such as how he considers the character Mittler “the mediator” to have been, in Goethe’s mind, representative of the catalyst (or human catalyst). [1] Puzzling as it may seem, on the question as to whether or not Hoffmann views Goethe’s version of human chemistry to be bunk (e.g. Ryan Grannell), crackpottery (Mitch Garcia, Marcin Borkowski, etc.), or extreme genius, Hoffmann comments, in 2012 opinion: [3]

“I am not for or against Goethe. A great writer, he used a theory of chemical combination (elective affinities) that was already outmoded by his time, to write a great novel of human relationships using that theory as a metaphor. None has done that since.

Quantum mechanics has in it the key to chemical bonding. I use it, in approximate ways. Affinities – opposites attracting each other, electrostatically, emerge. But also like atoms forming strong, covalent bonds. One can put the results in the language of affinities to describe approximately what happens, and we often do that to beginning students. Also chemists often use anthropomorphic language, and it’s just fine.”

In short, Hoffmann seems to categorize Goethe’s Elective Affinities as a “metaphor” theory, an extended type of chemical anthropomorphism (or chemical aphorism).

The only way to categorize this, in the sense of being a phenomenon afflicting many leading chemists (generally those not well-acquainted with chemical thermodynamics), is that this position of being curiously neutral about Goethe's theory, is something akin to a mixture of "not being able to see the forest among the trees" and "not being able to see the ships in the harbor", in the sense that:

(a) Goethe did not consider his human affinities theory to be metaphor, as evidenced by his March 23, 1810 advertisement (Morning Paper for the Educated) wherein he summarized or rather defended his position that “there is after all only one nature”, meaning that he considered the view presented therein to be reality;

(b) that at as Helmholtz proved in 1882, the measure of affinity in human reaction conditions (freely-going, isothermal, isobaric, surface-attached, coupled, cyclical, heat-driven chemical reactions) is Gibbs free energy changes, meaning that the modern physical scientist is faced with the oblique task of having to redefine human existence in the language of pure and applied chemical thermodynamics (human chemical thermodynamics), which is a daunting yet wondrous and elusive task, to say the least (meaning in detail that one has to master the 1,158 Gibbs-Clausius equations);

(c) as science historian Henry Leicester has summarized, in his Historical Background of Chemistry (1956), Gilbert Lewis and Merle Randall's influential 1923 textbook Thermodynamics and the Free Energy of Chemical Substances "led to the replacement of the term 'affinity' by the term 'free energy' in much of the English-speaking world", meaning that for chemists educated in the 1930s or later there existed a great unwritten divide or rather disjunct in knowledge between the quest to measure chemical affinity (1718-1923) and the years of modern chemical thermodynamics (1923-present) both of which are tied up in the following equation:

meaning that affinities of reaction (between atoms, molecules, or humans) is quantified and measured by differentials of free energy with respect to the extent of reaction, such as summarized by Belgian chemist Theophile de Donder in his 1936 Thermodynamic Theory of Affinity. In sum, through no fault of their own, a large percentage, possibly near to 100%, of modern chemists are completely unaware of this small but decisive and very hidden footnote of modern knowledge as relates to human existence as regards to the governance of human nature.

Hoffmann, on a related note, in his discussion of Fritz Haber’s ammonia synthesis work (Haber process), humorously refers to German physical chemist Walther Nernst as the “dean of German thermodynamics”. [1]