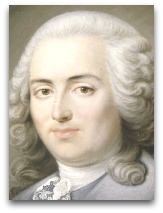 Quotes | On
The following are quotes on Turgot:

“Only two years after the publication of Montesquieu’s Spirit of Laws [1748], Turgot delivered those celebrated lectures [1750], of which it has been said, that in them he created the philosophy of history. The merit of Turgot is immense; he belongs to that extremely small class of men, who have looked at history comprehensively, and have recognized the almost boundless knowledge needed for its investigation. In this respect, his method is identical with that of Montesquieu, since both of these great men excluded from their scheme the personal details which ordinary historians accumulate, and concentrated their attention upon those large general causes, by the operation of which the destinies of nations are permanently affected. Turgot clearly perceived, that, notwithstanding the variety of events produced by the play of human passions, there is amid this apparent confusion, a principle of order, and a regularity of march, not to be mistaken by those whose grasp is firm enough to seize the history of man as a complete and single whole.”