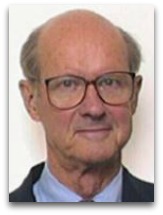 In existographies, Robert Alberty (1921-2014) (CR:11) was an American physical chemist and biophysical chemist noted for his 1955 multi-edition textbook Physical Chemistry, a renamed continuation of the 1913 eight-edition Outlines of Theoretical Chemistry by Frederick Getman (carried it through 1927 in four editions) and Farrington Daniels (carried it through 1955 in four editions). [1]

In 2003, Alberty piped in his opinion on the creationism vs evolution debate, as thermodynamics sees things. [4] The following quote, form Alberty's commentary:

“I do not agree that the universe is an isolated system in the thermodynamic sense.”

has been taken in support of the assertion, by apologeticists, that thermodynamics doesn't apply to the universe. [5]