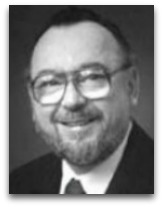 In existographies, Robert Theodore Balmer (1938-) (CR:8) is an American mechanical engineer noted, in animate thermodynamics, for his circa 1978 work on the applying entropy concepts to the study of the aging annually of fish (see also: fish molecule); specifically over a twelve month period, he studied all the characteristics of birth, growth, aging, and senile death and is said to have identified entropy flows into and out of the fish, such as food, excrement, and body heat dissipation. [1] In 2010, Balmer published Modern Engineering Thermodynamics, wherein among other subjects, e.g. Stanley Steamer, he employs the “black box” approach to thermodynamic problems. [2]

Overview
Balmer employs the balance equation for the total entropy of an animate, open system using the material time derivative:

is the net entropy transport rate,

is the entropy production rate, and

is the net gain (or generation) of the system entropy. Furthermore, the entropy transport rate can be broken down into three disctinct terms:

is the metabolic heat transfer,

is the absolute surface (frontier) temperature of the system, and the remaining two terms describe the entropy transport of the food and waste flows through the system. The above two equations can be combined, resulting in an effective entropy balance equation for open systems:

Considering heat from the system to the surroundings as negative, and an increase in the entropy between the incoming food and outgoing waste, as well as rewriting the entropy production term,

Balmer's hypothesis that "living systems are characterized by a continuously decreasing total entropy over their lifespans" is supported by three arguments: [3]

1) Since the metabolic heat produced can be assumed to be lost by the system to the surrounding environment, and the difference in food/waste entropy flow is also negative, the net entropy transport,

can be taken as a negative quantity in the material time derivative formulation.

2) There is reason to believe that

is minimized by efficient biological systems, as postulated by the Prigogine-Wiame theory of living systems. Thus the magnitude of

is greater than that of

in animate systems in order for the entropy reducing nature of living systems hypothesis to hold.

3) Many common characteristics of aging in animate systems are causally related to increasing order occurring at the molecular level. Additionally, the conversion of foodstuffs within the system itself into useful metabolic products (e.g. glucose) results in a decrease in entropy.

Balmer's formulation utilizes the similarities between the classical equations of chemical kinetics and the entropy balance equation of the second law of thermodynamics in order to derive a model for allometric biological growth, similar to the growth equation derived earlier by Austrian chnopsologist (biologist) Ludwig Bertalanffy. Critical assumptions of his modeling approach are that the rate of entropy transport is proportional to the surface area, and the entropy production rate is proportional to the system's volume. Furthermore, it is postulated that the entropy transport and production rates are directly functions of the instantaneous value of the system's total entropy. Using Balmer's approach, the entropy rate balance can be solved uniquely for the entire system as a function of its age [3].

Death
In his 1984 article “An Entropy Model for Biological Systems Entropy” Balmer postulated that: [3]

“All living systems are characterized by a continuously, decreasing total entropy level, and that biological death occurs at some minimum total entropy value. The time required to reach this minimum is the lifespan of the biological system.”

This is a curious view, generally in opposition to the long-standing view, such as professed by Erwin Schrodinger (What is Life?, 1944), that maximal entropy equates to death, not minimal entropy (see also: human entropy). One possible explanation is that viewing the animate system as open puts the focus on the relative rates of entropy transfer and production, instead of on the net generation of entropy over a finite interval, as is done for closed systems. Thus the formulations used in describing animate thermodynamic systems should carefully be chosen for open systems in order to avoid confusion with the older formulations of classical thermodynamics which tend to describe system behavior in terms of closed or isolated systems, in which no matter is exchanged with the surroundings.

Further reading
● Balmer, Robert T. (c.1978). “Entropy and Metabolism: A Macroscopic View of Aging”, Report produced as part of Grant No. ROI AG 00489-01 given by the National Institute on Aging to the University of Wisconsin School of Engineering and Applied Sciences.
● Balmer, Robert T. (1982). “Entropy and Aging in Biological Systems” (abs), Chemical Engineering Communications, 17(1-6):171-81.