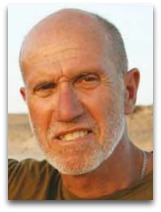 In existographies, Robert Bauval (1948) (RMS:101) is an Alexandria-born Belgian Egyptologist and astro-theologist author noted for []

Overview
In 1983, Bauval, while sitting in the desert in Egypt one night with a friend, he was told that Sirius rises, which marks the start of the Nile river flood, and that the three stars of the belt of Orion run in a row, but that the smallest star was slightly off-set to the left. Bauval then realization, firstly, that this "off-set" was the same as the off-set of the above-view of the three pyramids at Giza, that the size of the three pyramids were based on the size and angel of the three Giza pyramids, and, secondly, that the milky way is a mirrors the Nile River, such that, to the Egyptians, in the years 3,000 to 10,000BC, the sky, according to computer reconstructed images, was seen to them as a mirror image of Egypt and the Nile River, as shown below: [1] 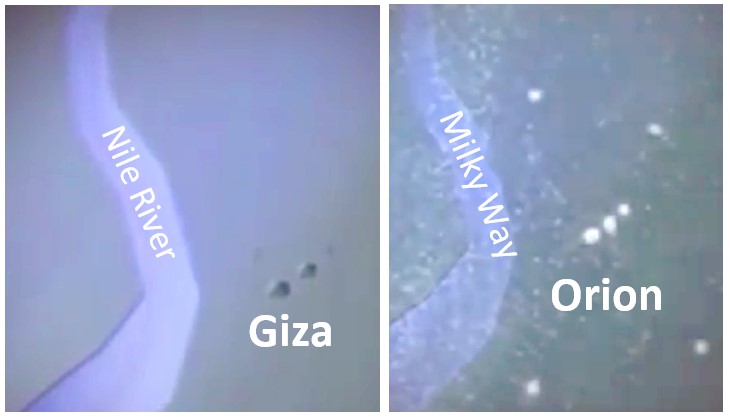 Said another way, to summarize this sharp connective discovery: [2]

“One night, while working in Saudi Arabia, he took his family and a friend's family up into the sand dunes of the Arabian desert for a camping expedition. His friend pointed out Orion, and mentioned that Mintaka, the dimmest and most westerly of the stars making up Orion's belt, was offset slightly from the others.”

Bauval, upon hearing this, realized that the smallest pyramid at Giza was also "offset slightly from the others", and therein solved the mystery of the pyramids.

In 1993, Bauval, together with Adrian Gilbert, published The Orion Mystery.

Shaft problem
In 1954, Egyptologist Alexander Badawy proposed a link between Khufu’s pyramid, the largest of the three Giza pyramids, at a height of 481 ft (Ѻ), and the Orion constellation, in respect to the design of the pyramid, something to the effect that the shafts were a way for the king’s soul to reach the heavens. [3]

Other astronomers (add names), supposedly, had also found that the two shafts on one side (right) were directed to the Little Dipper (from the queen’s chamber) and Alfa Draconis (from the king’s chamber). Bauval, on this basis, determined that in 2500BC, the two left shafts were directed such that the king’s chamber pointed to the belt of Orion and the queen’s chamber pointed to Sirius: 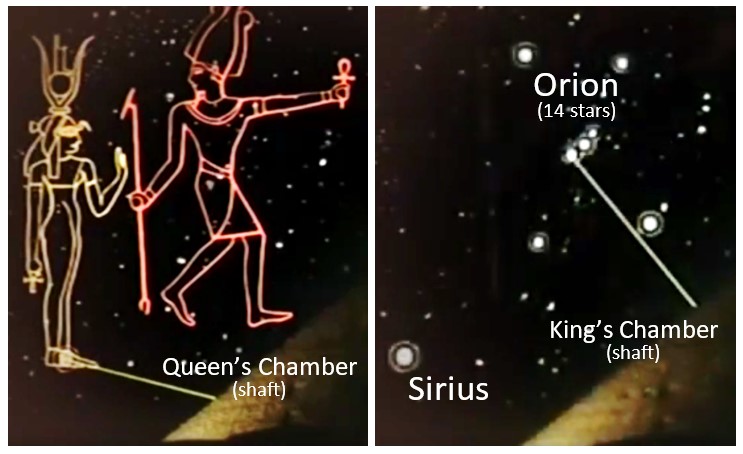