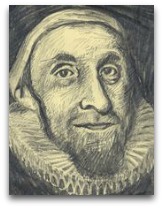 Overview
In 1621, Burton, in his The Anatomy of Melancholy, impressively employs electricity (amber), magnetism (loadstone), and heat (warmth) logic to explain love and beauty; the following is a noted excerpt: [1]

“As amber attracts a straw, so does beauty admiration, which only lasts while the warmth continues. But virtue, wisdom, goodness, and real worth, like the loadstone, never lose their power.”

Here, of note, we recall the later work of James Froude, on magnetism, heat, and love.

Reaction end
In 1640, Burton hung himself in a room at Christ Church, Oxford. Later, of note, this same room was occupied by a young Robert Hooke, as a college student. [3]

“In the preface to the first volume of Don Quixote, Cervantes refers those who wish to acquire some information concerning love to an Italian treatise by Judah Leo [Judah Leon Abravanel, c.1465-c.1523]. The full title of the book, which appeared in Rome in the sixteenth century, is Dialoghi di amore, Composti da Leone Medico, di nayione Ebreo, e di poi fatto cristiano [Dialogues of Love, composed by Doctor Leon, of Hebrew heritage, and who later became Christian]. There are said to be three French translations of it, but it was only after long searching that I succeeded in finding a copy, at the Bibliotheque Nationale in Paris. It proved to be a strange medley of astrology, metaphysics, theology, classical erudition, mythology, and medieval science. Burton, in the chapter on love, in his Anatomy of Melancholy, quotes freely from this work of Leo, whom he names as one of about twenty-five authors who wrote treatises on love in ancient and mediaeval times.

Like Empedocles, Leo identifies cosmic attraction with love. But he points out three degrees of love—natural, sensible, and rational. By natural love he means those "sympathies" which attract a stone to the earth, make rivers flow to the sea, keep the sun, moon, and stars in their courses, etc. Burton (1652) agrees with Leo, and asks quaintly:

"How comes a loadstone to draw iron to it . . . the ground to covet showers, but for love? . . . no stock, no stone, that has not some feeling of love. 'Tis more eminent in Plants, Herbs, and is especially observed in vegetals; as betwixt the Vine and Elm a great sympathy,"

"Sensible" Love is that which prevails among animals. In it Leon recognises the higher elements of delight in one another's company, and of attachment to a master.
"Rational" Love, the third and highest class, is peculiar to God, angels, and men.”