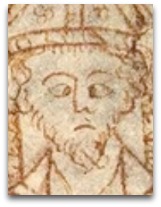 Overview
Grosseteste’s “Neoplatonic Aristotelianism” inspired Roger Bacon and Bonaventure to join the ranks of those who gave ‘light’ special status in the order of things; his work on light, and that light was a divine creative force, influenced Johannes Kepler. [2]

Quotes | On
The following are quotes on Grosseteste:

“Experimental science began particularly with the work of Robert Grosseteste, in the thirteenth century, but in the sixteenth and seventeenth centuries scientists began tot adopt the empirical experimentation that engineers and artisans were already using.”

Quotes | By
The following are quotes by Grosseteste:

“Now, all causes of natural effects must be expressed by means of lines, angles and figures, for otherwise it is impossible to grasp their explanation. This is evident as follows. A natural agent multiplies its power from itself to the recipient, whether it acts on sense or on matter. This power is sometimes called species, sometimes a likeness, and it is the same thing whatever it may be called; and the agent sends the same power into sense and into matter, or into its own contrary, as heat sends the same thing into the sense of touch and into a cold body. For it does not act, by deliberation and choice, and therefore it acts in a single manner whatever it encounters, whether sense or something insensitive, whether something animate or inanimate. But the effects are diversified by the diversity of the recipient, for when this power is received by the senses, it produces an effect that is somehow spiritual and noble; on the other hand, when it is received by matter, it produces a material effect. Thus the sun produces different effects in different recipients by the same power, for it cakes mud and melts ice.”

— Robert Grosseteste (1231), On Lines, Angles and Figures or On the Refraction and Reflection of Rays (Ѻ)