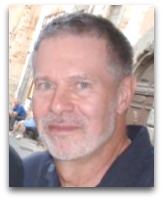 In science, Robert Hazen (1948-) is an American geologist, earth scientist, turned hydrothermal vent origin of life researcher, noted for his 2005 step-wise emergence origin of life model, according to which there is NO "exact point" at which life starts, but rather life is the summation of a number of multiple emergence events.

Overview
In 1988, Harold Morowitz, after working for a number of years, at Yale, on cellular energetics, transferred to George Mason University, and shortly thereafter began working, with Hazen, on the theoretical high-pressure chemistry of hydrothermal vents origin of life hypothesis; a theory which originated when firstly, the 1970s, Jack Corliss descended in the research submersible Alvin to the deep ocean floor and found ecosystems at undersea volcanic vents, and secondly, when, in the late 1980s, German chemist Gunter Wachtershauser proposed that clay substrates were involved in the hydrothermal vents origin scenario.

In Sep 2000, Hazen attended a “What is Life?” conference in Modena, Italy, which was attended by a hundred scientists, philosophers, and theologians, amid which the most contentious debate occurred among the scientists, resulting in four main origin of life views:

In 2005, Hazen, as a precipitate of the conference, published Genesis: the Scientific Quest for Life’s Origin, wherein he outlines a step-wise gradual emergence origin of life theory, amid which he opens to the folklore version of thermodynamics, aka energy is conserved, but all systems tend towards disorder, after which he attempts to sell “emergence” as the missing law (pg. 12) to counter the second law; the brand of emergence he sells, being a mixture of: Per Bak sand pile “self-criticality”, Stuart Kauffman “autocatalytic closure” networks, Stephen Wolfram + John Holland artificial life algorithm simulations, and Murray Gell-Mann “nonextensive entropy” models of complexity.

Chemistry → Biology | Stepwise model
The following is Hazen’s core model (pgs. 28-31), namely, based on Harold Morowitz’s multiple emergences model, Hazen asserts that a number of summational steps were involved in going from non-life to life, and that there is NO “exact point” at which life began:

“Attempts to formulate an absolute definition that distinguishes between life and nonlife represents similar false dichotomy. The first cell did not just appear, fully formed with all its chemical sophistication and genetic machinery. Rather, life must have arisen through a sequence of emergent events—diverse processes of organic synthesis, followed by molecule selection, concentration, encapsulation, and organization into diverse molecular structures. The emergence of self-replicating molecules of increasing complexity and mutability led to molecular evolution though the process of natural selection, driven by completion for lamented raw materials.

What appears to us as a yawning divide between nonlife and life obscures the fact that the chemical evolution of life occurred in this stepwise sequence of successively more complex stages of emergence.

Progressive hierarchy of emergent steps leading from a prebiotic earth enriched in organic molecules, to functional clusters of molecules perhaps arranged on a mineral surface, to self-replicating molecular systems that copy themselves using resources in their immediate environment, to encapsulate in membranes, i.e. to cellular life. Recall the words of Harold Morowitz: ‘the unfolding of life involves many, many emergences’.

Such a stepwise scenario informs attempts to define life. To define the exact point at which such a system of gradually increasing complexity becomes ‘alive’ is intrinsically arbitrary. Where you, or I, or anyone else chooses to draw such a line is more a question of perceived value than of science.”

This last paragraph brings to mind the Francis Macnab (1818) division, according to which a growing plant is not alive.

Religion
In 2003, Hazen, in his “In God We Trust: Motto Come Lately”, defended from the seeming atheist side of the fence, against the Alabama Courthouse “Ten Commandments” display dispute, pointing out that the founding fathers did not advocate “in god we trust” on the US coinage, but rather correctly that astronomer David Rittenhouse in the 1790s put the phrase “United States of America” and “Liberty” on the coins. [2] Some of the responses to Hazen’s 2006 Washington Post interview (Ѻ) on life and religion, however, seem to give hint that he is a closet theist, using the term “emergent complexity” as his ontic opening, e.g. on the query: “does the scientific research into the origin of life require faith?”, Hazen responded:

“Science MUST remain agnostic on the question of god's existence and the meaning of the universe. We should leave those question to theology. In this sense science is VERY limited in what it can do and say about origins. We can only deal with the (rather trivial?) details of chemistry.”

In his 2013 “The Origins of Life” lecture (Ѻ) at Villanova University he says “scientists what to know how god did it”, beyond what’s stated in Genesis, which is clear indication he is a closet theist.

Education
Hazen completed his BS and SM in geology at MIT in 1971, his PhD in earth science in 1975 at Harvard, after which he joined the research department of Carnegie Institution. (Ѻ)