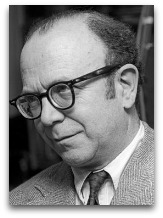 In existographies, Robert Heilbroner (1919-2005) (CR:9) was an American economist noted for a number of unrealistic statements about human behavior and economic systems.

Criticism
In 1953, Heilbroner, in his The Worldly Philosophers, gave the opinion that human behavior, in effect, is something distinct in the universe: [1]

“There is an unbridgeable gap between the ‘behavior’ of [subatomic particles] and those of human beings who constitute the objects of study of social science. Aside from pure physical reflexes, human behavior cannot be understood without the concept of volition—the unbridgeable capacity to change our minds up to the very last minute. By way of contrast, the elements of nature ‘behave’ as they do for reasons of which we know only one thing: the particles of physics do not ‘choose’ to behave as they do.”

English chemist-physicist Philip Ball cites this quote as an example of incorrectness. [2]

In 1968, Heilbroner, published his The Economic Problem, give some type of circular flow economic diagram, and states the following: [3]

“The flow of output is circular, self-renewing and self-feeding, [because] outputs of the system are returned as fresh inputs.”

“This is patent nonsense. Anything that can take as input what it excretes as output is a perpetual motion machine, a violation of the second law of thermodynamics.”