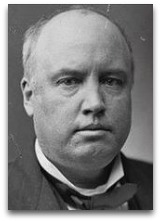 Overview
Ingersoll, as a youth, was made to attend his minister father's two Sunday sermons; on his own, however, he read: Epicurus, Zeno of Citium, Voltaire, and Thomas Paine. [1]

In 1879, Ingersoll published his The Gods and Other Lectures (Ѻ), the following is the frontispiece image:

Some Mistakes of Moses
In 1879, Ingersoll gave his famous unscripted “Some Mistakes of Moses” lecture, which, as he says, was "never delivered twice the same", turned book (1880), characterized as a satirical deconstruction of Genesis and Exodus; the following is a noted quote:

“It has always been a mystery to me how Adam, Eve, and the serpent were taught the same language. Where did they get it? We know now, that it requires a great number of years to form a language; that it is of exceedingly slow growth. We also know that by language, man conveys to his fellows the impressions made upon him by what he sees, hears, smells and touches. We know that the language of the savage consists of a few sounds, capable of expressing only a few ideas or states of the mind, such as love, desire, fear, hatred, aversion and contempt. Many centuries are required to produce a language capable of expressing complex ideas. It does not seem to me that ideas can be manufactured by a deity and put in the brain of man. These ideas must be the result of observation and experience.”

This lecture, in the Jewish community (see: Jewish atheism), has been the most translated one into Yiddish (Jacoby, 2004); this was one of the books cited in the Redford deconversion model. [6]
Why I Am an Agnostic
In 1896, Ingersoll, in his “Why I Am an Agnostic” lecture, explained why he is an agnostic via the following points: [5]

I. Influence of Birth in determining Religious Belief—Scotch, Irish, English, and Americans Inherit their Faith—Religions of Nations not Suddenly Changed—People who Knew—What they were Certain About—Revivals—Character of Sermons Preached—Effect of Conversion—A Vermont Farmer for whom Perdition had no Terrors—The Man and his Dog—Backsliding and Re-birth—Ministers who were Sincere—A Free Will Baptist on the Rich Man and Lazarus.
II. The Orthodox God—The Two Dispensations—The Infinite Horror.
III. Religious Books—The Commentators—Paley's Watch Argument—Milton, Young, and Pollok.
IV. Studying Astronomy—Geology—Denial and Evasion by the Clergy.
V. The Poems of Robert Burns—Byron, Shelley, Keats, and Shakespeare.
VI. Volney, Gibbon, and Thomas Paine—Voltaire's Services to Liberty—Pagans Compared with Patriarchs.
VII. Other Gods and Other Religions—Dogmas, Myths, and Symbols of Christianity Older than our Era.
VIII. The Men of Science, Humboldt, Darwin, Spencer, Huxley, Haeckel.
IX. Matter and Force Indestructible and Uncreatable—The Theory of Design.
X. God an Impossible Being—The Panorama of the Past.
XI. Free from Sanctified Mistakes and Holy Lies.

Quotes | On
The following are quotes on Ingersoll:

“With the rarest genius, in beautiful alliance with his heroism, his kindness, and his boundless love, made the name of Ingersoll immortal.”

“Ingersoll is the nearest approach we Americans have had to Voltaire.”

“How terrible this [evolution theory of Darwin] will be upon the nobility of the old world. Think of their being forced to trace their ancestry back to the duke Orang Outang, or the princess Chimpanzee.”

“Life is a narrow vale between the cold and barren peaks of two eternities. We strive in vain to look beyond the height. We cry aloud, and the only answer is the echo of our wailing cry. From the voiceless lips of the unreplying dead there comes no word.”

“In the republic of mediocrity, genius is dangerous.”

“Christianity has made more lunatics than it ever provided asylums for.”

“If by any possibility the existence of a power superior [see: higher power] to, and independent of, nature shall be demonstrated, there will be time enough to kneel. Until then, let us stand erect.”

“It seems from what we hear on all sides that the Christian religion is a huge blunder; that the Mosaic account of the creation is an absurdity large enough to throw all nations into rollicking guffaw; that Adam and Eve never existed (see: Adam and Eve never existed); that the ancient flood and Noah's ark were impossibilities; that there never was a miracle; that the Bible is the friend of cruelty, of murder, of polygamy, of all forms of base crime; that the Christian religion is woman's tyrant and man's stultification; that the Bible from lid to lid is a fable, a cruelty, a humbug, a sham, a lie.”

“Some Christian lawyers—some eminent and stupid judges—have said and still say, that the Ten Commandments are the foundation of all law. Nothing could be more absurd.”

“As people become more intelligent, they care less for preachers and more for teachers.”

“Bishop Butler dug up more snakes than he killed—suggested more difficulties than he explained—more doubts than he dispelled.”