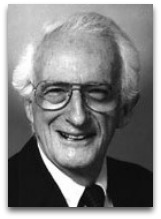 In hmolscience, Robert Louis Kahn (1918-) is an American psychologist and systems theorist noted, in human thermodynamics, for his 1966 entropy (running down) and negative entropy (running up) conceptualization, developed with Daniel Katz, of social organizational survival.

Overview
In 1966, Kahn, in his The Social Psychology of Organization, co-authored American psychologist Daniel Katz, espoused some type of entropy-negentropy themed organizational theory; the gist of their argument being the ideology that (a) the second law states that “any system will tend to run down, lose it differentiated structure, and become one with its environment”, which the refer to as “death forces”, therefore (b) for a social organization to survive it “must secure some continuing supply of materials and men” and therefore “acquisitive and extractive procedures are thus the primitive mechanisms by which negative entropy is obtained.” [1]

Education
Kahn earned a PhD from the University of Michigan, where he taught (1948-76) and directed the Survey Research Center. His research ranged over organizational and social psychology and survey methodology; his varied published works include books on electoral politics, unions, and surveys.