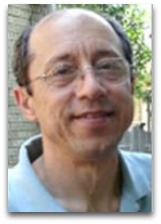 In hmolscience, Robert Kenoun (1950-) is an Iranian-born American materials scientist, metallurgical and electrical engineer noted, in human thermodynamics, for 2006 his social internal energy minimization theory, according to which societies, according to the first law and second law, of thermodynamics, historically progress, via “ultimate driving force”, seeking to “maximum stability by attaining the lowest state of internal energy, in connection with a given environmental condition.” [1]

Overview
In 2006, Kenoun, in his A Proposition to Theory of History and Social Evolution, modeled social system dynamics on atomic-molecular system type metaphors, e.g. by supposing that human-human bonds are “relational bonds” similar to hydrogen bonds between water molecules in the liquid phase, and argues, based on the first two laws of thermodynamics, that the “ultimate driving force” of a social system’s evolutionary process is to seek “maximum stability by attaining the lowest state of internal energy, in connection with a given environmental condition", which he equates to “boundary conditions”. Kenoun equates a state of the lowest level of internal energy with socio-economic equality among its members, which he argues is a logic emboddied in Marxism or socialism in general.

In respect to Kenoun’s scientific view of human history, as presented in his Proposition to Theory, he states that ever since he was a young man, he had always wondered how to make sense of the process of history? The following is the basis of Kenoun's logic: [1]

“If society is composed of humans and humans are built with basic material components and there are laws to govern the behavior of these components, then these laws must have some influence in the behavior of complex living systems.”

One of the more interesting aspects of Kenoun’s theory is his postulations on the nature of the internal energy of various types of human social systems, e.g. a five-member family or a society, etc. To cite one example, he states that if one member of the system of a family were to leave, e.g. a father dies, which he correlates to a “loss of mass” in the system, there would result an increase of internal stress among the relational bonds of the remaining members, which Kenoun equates to a change in the internal energy of the system. The underlying supposition here, alluded to by Kenoun, is that the concept of chemical potential, introduced in 1873 by American mathematical engineer Willard Gibbs, applies to human systems.

In 2015, Kenoun was arguing against social Darwinism of the Herbert Spencer variety. [5]

Originality
Kenoun states that he developed his theory “in isolation from the work accomplished by other experts to maintain its originality”; which puts him in the same league as thinkers such as American physicist Wayne Angel, who derived his 2005 The Theory of Society straight from American physicist Herbert Callen’s thermodynamics textbook.

Education
Kenoun completed a BS in material science and an MS in metallurgical engineering at the Iranian University of Tehran in 1976. Two years later, he moved to the United States and soon thereafter completed a MS in electrical engineering. [2]