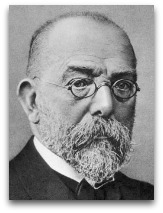 Education
Koch, son of a mining engineer, astounded his parents at the age of five by telling them that he had, with the aid of the newspapers, taught himself to read, a feat which foreshadowed the intelligence and methodical persistence which were to be so characteristic of him.

Overview
In c.1878, Koch isolated the microorganisms that cause anthrax, tuberculosis, and cholera, e.g. that tubercle bacilli occur in all tuberculous disorders; he posited four postulates on the causation of infectious diseases, which became the gold standard in the detection of the causes of disease. (Ѻ)

Quotes | By
The following are quotes by Koch:

“On many occasions, I examined normal blood and normal tissues and there was no possibility of overlooking bacteria or confusing them with granular masses of equal size. I never found organisms. Thus, I conclude that bacteria do not occur in healthy human or animal tissues.”

“If my efforts have led to greater success than usual, this is due, I believe, to the fact that during my wanderings in the field of medicine, I have strayed onto paths where the gold was still lying by the wayside. It takes a little luck to be able to distinguish gold from dross, but that is all.”