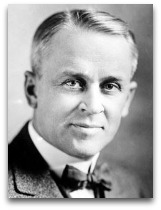 In existographies, Robert Millikan (1868-1953) (IQ:175|#271) (Kanowitz 50:29) (CR:8) was an American physicist, known for his 1910 oil drop experiment (Ѻ), conducted with Harvey Fletcher, wherein they calculated the charge on a single electron, for his 1914 work on proving the photoelectric effect correct, and for his 1928 cosmic ray anti-entropy heat death religious theory.

Religion | Cosmic rays | Heat death
Millikan, as the son of a minister, was a religious man; views which became apparent in his later years.

In 1925, Millikan coined of the term “cosmic rays” (discovered in 1912), about which in 1928 he had developed a religious-based theory type of explanation, commenting that: [1]

“[It is] fairly definite [that cosmic rays are] signals broadcast throughout the heavens … the birth cries of infant atoms.”

In 1926-27, Millikan, in his Terry Lectures, published as Evolution in Science and Religion (1927), argued for a complementary relationship between Christianity and science.

In the 1930s, Millikan entered into a debate with Arthur Compton over whether cosmic rays were composed of high-energy photons (Millikan's view) or charged particles (Compton's view). Millikan thought, in the above quote, his cosmic ray photons were the "birth cries" of new atoms continually being created by God to counteract entropy and prevent the heat death of the universe. Compton would eventually be proven right by the observation that cosmic rays are deflected by the Earth's magnetic field (and so must be charged particles).

Oil drop experiment
In 1909, Millikan began experimenting with water droplets, falling between two charged plates, finding that evaporation skewed the results; in 1910, he progressed to doing the experiments with oil droplets, diagrammed below, wherein via a combination of the gravitational force, electric force, mass and density of the oil, he calculated the charge on a single electron.

determined the value of the charge of an electron, e = 1.6 × 10E-19 C. Millikan published his findings and other physicists accepted them circa 1913.

Prior to this oil-drop experiment, it was thought that charge could be anything at all on some continuum. Instead, this experiment showed that charge is quantized: it comes in discrete (and equal) quantities. This firmer understanding of the electron enabled the settling of a few debates concerning its nature. (Ѻ)

Quotes | By
The following are quotes by Millikan:

“Gibbs did for statistical mechanics and for thermodynamics what Laplace did for celestial mechanics and Maxwell did for electrodynamics, namely, made his field a well-nigh finished theoretical structure."

“The next mode of interaction of light with electrons was discovered and explained in terms of a famous billiard-ball model proposed by Arthur Compton in 1923. Compton pictured a free, stationary electron as being hit by a ‘photon’ of light.”