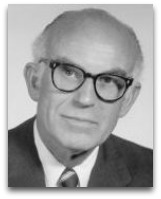 In hmolscience, Robert Alexander Nisbet (1913-1996) was an American sociologist noted, in sociological thermodynamics, for his 1970 Adams brothers influenced The Social Bond, wherein he speculates on how social bonds are comprised of entropy, in part.

Overview
In 1970, Nisbet, in his The Social Bond, discussed his ideas on social entropy, being “those behavioral processes that have a negative quality arising from their being in opposition to the norms, roles, and authorities making up a social order”, which he conceptualized as one of seven parts of the social bond. The following quote captures Nisbet’s view: [1]

“Just as modern chemistry concerns itself with what it calls the chemical bond, seeking the forces that make atoms stick together as molecules, so does sociology investigate the forces that enable biologically derived human beings to stick together in the ‘social molecules’ in which we actually find them from the moment, quite literally, of their conception.”

Nisbet, in his books, seems to focus on social change and the processes that result in disorder, rather than order, and instability, rather than stability.

Adams
Nisbet was influenced by American historians Henry Adams and Brooks Adams in his adoption of the use of entropy in his sociology theories. Nisbet had begun discussing the second law of thermodynamics in relation to social theory as early as 1968 and was referencing the entropy views of Henry Adams in 1969. [3]

“When Henry Adams and his brother Brooks used the word ‘degradation’ in their writings, for the most part they had in mind a process in human history comparable to entropy in the physical world. Both the Adams brothers saw in the history of civilization an endemic running down of energy that was reflected, they believed, in an increasing dissolution of culture and of moral values in their own time.”

On this theme, albeit not using any deeper thermodynamic speculation, Nisbet goes on to discuss the changes in American universities following WWII.