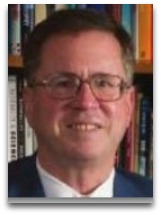 In hmolscience, Robert John Russell (c. 1946-) is an American physicist-theologian noted, in religious thermodynamics, for his circa 1982 views on thermodynamics and evil.

Overview
In circa 1982, Russell presented views on thermodynamics of evil, discussed generally in terms of entropy. Russell’s central premise is that both entropy and evil are connected to their effect or measure of disorder, and must be related if they both exist. [1] The following are Russell's opening words from his 2008 chapter on the subject of the thermodynamics of the nature of good and evil in nature: [2]

“The power of evil is tragically self-evident. The domain of the second law of thermodynamics extends throughout science. Is there any substantive relationship between entropy and evil?”

English biochemist-theologian Christopher Southgate cites Russell as having developed the theory, in 1984, that a future universal eschatological state will be characterized by a suspension of the second law of thermodynamics. [3]

References
1. Russell, Robert John. (1982). "Disorder and Order: A Study of Entropy and a Study of Evil", Twenty-ninth Summer Conference of the Institute on Religion in an Age of Science, Star Island, New Hampshire, 24–31 July.
2. Russell, Robert J. (2008). Cosmology: from Alpha to Omega: the Creative Mutual Interaction of Theology (ch. 7: Entropy and Evil: the Role of Thermodynamics in the Ambiguity of Good and Evil in Nature, pgs. 226-49). Fortress Press.
3. Southgate, Christopher. (2005). God, Humanity, and the Cosmos (thermodynamics, pgs. 124, 293, 299). Continuum International Publishing Group.