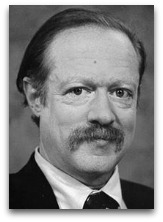 In hmolscience, Robert C. Solomon (1942-2007) was and American philosopher, focused on a mix of emotion theory, and existentialism themed philosophy, noted for his 1984 so-called "metaphysical model" discussion of love as seen by Aristophanes (c.400BC), Goethe (1796), and "field theory" of modern physics, a connective idea he seems to cull from Cole Porter's 1955 song “It’s a chemical reaction, that’s all.”

Goethe | Gilbert & Sullivan
In 1970, in one of his collected essays, states the following: [3]

“We look at relationships as supplements, as external links between ourselves and others, and for that reason, inevitably, we misunderstand them. The fact is that we are not atoms floating in a social void, waiting for a ‘chemical attraction’ between us so that we can form molecules. That image has been popular for years, from Goethe’s ‘elective affinities’ to Gilbert and Sullivan (‘hey diddle diddle with your middle/class kisses …”

Solomon, to note, footnotes the “Gilbert and Sullivan” mention to the following undated citation:

“Hey diddle diddle with your middle-class kisses.
“It’s a chemical reaction, that’s all.”

This "Gilbert and Sullivan" association, however, may be misplaced conjecture, as the above seems to come from Cole Porter's 1955 song “It’s a chemical reaction, that’s all.”

“The old expression about love being a matter of ‘chemical attraction’—from Goethe to Gilbert and Sullivan—is, scientifically, a century out of date; ‘attraction’ is no longer a question of one atom affecting another but the product of two electromagnetic fields, each of which exists prior to and independently of any particular atoms within its range.”

“It may have all of the appearance of stability, but the violence of the forces in balance are such that, should there be a single slip, a momentary imbalance, an ill-considered comment or careless act, that stability shatters into disaster.”

Spontaneity
In 1993, Solomon, in his The Passions: Emotions and the Meaning of Life, had the following to say about the so-called “spontaneousness” of love: [2]

“We often contrast the ‘spontaneity’ of the passions with the ‘ponderous deliberations’ of reason. And it is true that we often ‘find ourselves’ in a passion. But this appearance must be explained. The fact that we ‘find’ this to be the case does not entail nor even suggest that we are not ourselves responsible for them. And we all know so well that many times we ‘catch ourselves’, not in a passion, but deliberating—even ponderously—in an effort to build up a passion, ‘working ourselves into a rage’, ‘making ourselves feel guilty’, or rehearsing the virtues and possibilities of a prospective ‘date’ until we virtually push ourselves into the dubious abyss into which we allegedly ‘fall’ when we ‘fall in love’. There is nothing ‘spontaneous’ about such emotion. And even when our passions are unquestionably spontaneous in that sense, it remains to be seen whether they are not so only because they have been used in similar circumstances so many times before and have already been so often practiced and finely developed. Like the apparently ‘spontaneous’ genius of a Nicolo Paganini, a James Whistler, or a Thomas Mann, our passions are ‘spontaneous’ only in the sense that they can benefit from many years of hard work and painful development; and the present masterpiece seems to emerge as if on its own.”

Difficulties on theory
The salient difficulties on theory of Solomon’s overt assertion that “love” is an invented word invented to describe, and in reality but an admixture of emotion, myth, and metaphor, can be discerned from his 1981 preface, wherein he states the following:

“Romantic love, we still read in cosmopolitan, is a ‘matter of chemistry’, an image that has its support in the writings of the greatest poets, in Shakespeare, for instance, and in Goethe, whose novel Elective Affinities has been prime reading in Europe for almost two centuries.”

“We might not believer that love is ‘forever’, but we do say, of a glorious fling that lasted three months, ‘it didn’t work out.’ What were we supposed to be working for? Why measure the success of a relationship by how long it lasts?”