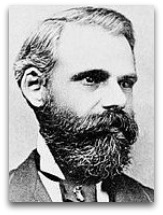 In existographies, Robert Thurston (1839-1903) (CR:29) was an American mechanical engineer noted for a number of publications on the operation of the steam engine and thermodynamics, such as his 1878 A History of the Growth of the Steam Engine. [1]

Overview
In 1871 to 1872, Thurston, at the Stevens Institute of Technology, Hoboken, NJ, gave a lecture on the "history of steam engines" to a mixed audience, mostly of engineers, by profession, and mechanics.
-
In 1878, Thurston expanded his early steam engine history lectures, with the consultation and illustrations of Robert Stuart, into A History of the Growth of the Steam Engine.
In 1890, Thurston completed the first English translation of French physicist Sadi Carnot’s 1824 Reflections on the Motive Power of Fire; in which an accompaniment of related works are found. [2] In the editor's introductory to the English translation Thurston tells us: [3]

“When this little treatise which is here for the first time published in English becomes familiar to those for whom it is intended, it will be, to many at least, a matter of surprise no less than pleasure to discover that France has produced a writer on this now familiar subject [thermodynamics] whose inspiration anticipated many of the principles that those founders of the modern science, Rankine and Clausius, worked out through the tedious and difficult methods of the higher mathematics.”

Soul
In 1894, Thurston, in his The Animal as a Machine and Prime Motor: and the Laws of Energetics, outlined a rudimentary outline of a theory of thermodynamics of “animal systems”; wherein, among other things, as a soul theorist, he speculates the following: [4]

“We are gradually progressing towards the establishment of a law of persistence of all existence, whether of matter, of force and energy, or of organic vitality, and perhaps even to its extension until it includes intellectual and soul life.”

Curiously, many thermodynamicists enter upon these types of speculations in the last decade of their life; Thurston in this case was age fifty-five at the time of the above writing and died nine years later.

Quotes | Employed
The following are quotes employed by Thurston:

“As Minerva sprang, mature in mind, in full stature of body, and completely armed, from the head of Jupiter, so the steam-engine came forth, perfect at its birth, from the brain of James Watt.”

Quotes | By
The following are quotes by Thurston:

“Relieving mankind from manual toil, the invention of the steam engine [Papin, 1690] has left to the intellect the privilege of directing the power, formerly absorbed in physical labor, into other and more profitable channels. The intelligence which has thus conquered the powers of nature, now finds itself free to do head-work; the force formerly utilized in the carrying of water and the hewing of wood, is now expended in the god-like work of thought. ”

“Sadi Carnot was, perhaps, the greatest genius, in the department of physical science at least, that this century has produced.”