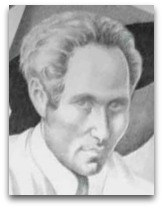 Social phases
Seidenberg, building on Henry Adams’ social phase theory of history, argues that similar to a salt solution forming a crystal, so to may a liquid social history produces a solid machine-like society: [4]

“The long travail of man’s past in which his instincts and his intelligence reacted upon on another in all the diverse facets of his history, of his rising cultures and dying civilizations—the summation of that past must be locked upon as a kind of prologue of clashing forces tending toward an inherent but wholly unsuspected climax.

The dynamic protagonist in this drama of human history is man’s intelligence, through whose agency he established, slowly and by uncertain stages, a condition of ‘inner accommodation’, of mounting compliance with the rational elements in his nature.

This ‘state of inner accommodation’, becoming ever more intensified, might be compared to the slow concentration of a solution. To outward appearances no perceptible change seems to be taking place. As the solution becomes more supersaturated, however, it approaches a state of incipient change. And if at this stage, as is well known, a crystal of the same substance is introduced into the solution, an immediate change of state takes place, and all the excess salt crystallizes forthwith. Similarly, a subcooled liquid may be induced to crystalize; an in the domain of physico-chemical systems such transformations are known as ‘changes of phase’.

Returning to the field of history, on the basis of this analogy, that the incipient and diffused trend toward organization has been hastened into a universal movement by the sudden introduction of a pure crystal—the machine.”

“The sweeping applicability of the second law of thermodynamics constitutes an inviting terrain in which to build analogies: its meaning, at once self-evident and mysterious, invites speculation, and perhaps nowhere more so than in the relationship between organic and inorganic systems. Both exhibit the same ‘spontaneous’ development characteristic of irreversible processes; that is to say, the process of crystallization, once started, continues spontaneously, just as the trend toward increased organization follows an obligatory course in the development of that historic determinism associated with the dominance of intelligence.

There is, moreover, a condition, known in the terminology of thermodynamics as ‘metastable state’, which describes precisely the condition of incipient change between two phases of a system that would seem to serve as the perfect analogue to that state of ‘inner accommodation’ spoken of above. We have thus, in the view of these analogous characteristics, at least an intimation of a significant parallelism, inviting us to further exploration.”

Some of the above, to note, brings to mind the “analogy fallacy”, namely that in Seidenberg’s phrasing of in the “analogies which Adams pursued”, he evidences a confusion about when a scenario is an analogy vs when one is reality.

Quotes | Employed
The following are quotes employed by Bacon:

“We cannot command nature except by obeying her.”

“Does it make sense to talk about a ‘flow of entropy’? This is an example of what happens when we carry familiar patterns of verbalization into new situations: we have at first no guarantee at all that the old verbalizations will even have meaning, but we at least in this way provide ourselves with a program of exploration.”

“No one who has watched the course of history during the last generation can have felt doubt of its tendency. Those of us who read Buckle’s first volume when it appeared in 1857, and almost immediately afterwards, in 1859, read the Origin of Species and felt the violent impulse which Darwin gave to the study of natural laws, never doubted that historians would follow until they had exhausted every possible hypothesis to create a science of history.”

“The driving motive (or impelling cause) in all natural events is the difference between the existing entropy and its maximum value.”

“We cannot make any sharp line of distinction between the living and the non-living. At the level of the submicroscopic viruses, they overlap. Some particles show some of the properties of life but not others. Some ‘dead’ protein molecules are much bigger than the particles of some ‘living’ viruses. Particles which show the properties of life can be had in paracrystalline, and even in crystalline, form. There are many similarities between the morphology and behavior and crystals and the living organism.”

“What is needed is an altogether new instrument—a microscope for elephants; one that shall envisage the units of a biological population as the established statistical mechanics envisage molecules, atoms and electrons; that shall deal with such average effects as population density, population pressure, and the like, after the manner in which thermodynamics deal with the average effects of gas concentration, gas pressures, etc.; that shall accept its problems in terms of common biological data, as thermodynamics accepts problems stated in terms of physical data; and that shall give the answer to the problem in the terms in which it was presented.”

“Even in the domain of situations which would be unanimously described as primarily ‘thermodynamic’, it would appear that there is a rather large verbal element in the coupling of ‘disorder’ with entropy, and that this coupling is NOT always felicitous (see: entropy as disorder confusions). Consider, e.g., a quantity of sub-cooled liquid, which presently solidifies irreversibly8, which increase of entropy and temperature, into a crystal with perhaps a regular external crystal form and certainly a regular internal arrangement as disclosed by X-rays. Statistically, of course, the extra ‘disorder’ associated with higher temperature of the crystal more than compensates for the effect of the regularity of the crystal lattice. But I think, nevertheless, we do not feel altogether comfortable at being forced to say that the crystal is the seat of greater disorder that the parent liquid.”

Quotes | On
The following are quotes on Seidenberg:

“Seidenberg, a friend of Lewis Mumford, was an architect with a sociological perspective on technology. He understood that technology had become a system and that it needed to be situated within a historical context to understand its impact on humans. His work is comparable to that of Jacques Ellul.”

Quotes | By
The following are quotes by

“Order demands order. And just as, in the realm of physics, there are in fact no ‘isolated systems’, so too, in the domain of social relations, all systems, however arbitrarily defined, exist not in a social vacuum but in relation to adjacent systems.”

“To say that history follows a definitely determined course comes close to implying that its processes are amenable to specific laws. This thesis has often enough been maintained but perhaps never satisfactory demonstrated. If such laws are comparable to scientific laws, they should afford a basis for prediction; but even allowing a wide latitude for inaccuracies, the prognostications hat have been ventured in the field of history have been either wide off the mark or at best tentative and generalized rather than specific and positive. Certainly no ‘laws of history’ have ever been stated with sufficient precision to invite application to past or future with anything approaching scientific standards.”

“A science of society, if not of history, is a science that, in the words of Henry Adams (1894), ‘must be certain, like other sciences, and must fix with mathematical certainty the path which human society has got to follow.’ In this pronouncement we perceive that Adams is thinking of humanity as a unified whole, composed doubtless of individuals whose existence, in terms of a scientific approach to the historic process, is comparable to that of molecules in a physico-chemical system. That is to say, just as the characteristics of molecular structure and the laws of molecular behavior are reflected in the identity of things on a macroscopic level, so too will the mass of individuals in their common properties and average qualifications define the character of the collective whole.”

“Perhaps a further analogy from the physico-chemical worlds may help to elucidate the point: though water, for example, turns into a solid of ice under changes of temperature at constant pressure, it does so only at a definite point and without forewarning. History, viewed as a transitional movement in the development of man, may likewise have its unrevealed critical eras its morphologically significant turning points.”

“The awareness of historic fatality or ‘historic determinism’ is deeply connected with the problem of time and irreversibility. But these ideas, no less than those notions of statistical averages and probabilities mentioned above, are concepts that belong primarily to the field of thermodynamics, where they possess greater scope, precision, and universality. It is therefore not surprising that a kinship of some kind has been suspected between their bearing in the domain of history and even more so in that of biology—particularly in relation to the theory of evolution—and their meaning in the field of thermodynamics. The exact nature of this relationship has been a matter of growing interest to scientists if not to historians. Yet the challenge of the problem has not altogether escaped their attention: this professor Carl Becker, for instance, found occasion to use the symbol of increasing entropy — ‘ds/dt is always positive’ — as a suggestive subheading to the last chapter of his fascinating book Progress and Power. But certainly, among historians no one has been as instant as Henry Adams in attempting to establish a relationship between the historic process and the phase rule of Willard Gibbs in an effort to achieve that science of history which he believed to be firmly implied in the universal formulae of thermodynamics.”

“Here, in Boltzmann’s statement of the driving motive in all natural events, we indeed come upon that deep-seated feeling of ‘direction’ associated with all evolutionary processes, upon which, basically, our very sense of time itself is thought, according to Eddington (1929), to depend.”

“We may thus say that the conditions for sustaining an analogy between the fundamental processes of history and those of physico-chemical systems may be entertained at least on the broad basis of the second law of thermodynamics. Hence, we may provisionally equate, for the purposes of our analogy, the individual with the random molecule; the machine with the crystal; society as an organized entity with a physico-chemical system having a crystal structure; and, finally, a basic change of historic direction with a thermodynamic change of phase.”

“In Blum’s ‘Evolution from a Thermodynamic Point of View’ (1935), we perceive in evolution a certain drive, an inherent direction, which is NOT to be identified on the basis here indicated with any teleological end.”

“Science has not yet produced the Vignola of its ensemble architecture—the ‘Newton’ called for by Adams. Here we must wait not only for the coming of a Newton, but the development of a science not yet begun! Yet, as we observed, Alfred Lotka, among others, have broken ground in this direction. This [new] science will recognize and delineate the dynamics of this basic transformation in terms of an historic change of phase, analogous in its structural meaning to a change of phase in the physico-chemical world. In general, it will establish the laws and structure and principles of an inescapable historic determinism.”

“Through the vehicle of analogy, we arrived at an interpretation of [historical] phenomena in accordance with a thesis first enunciated by Henry Adams: namely, that the stages in the course of human evolution may be comparable to the changes of state in a purely material system as expressed by the rule of phase in thermodynamic theory.”