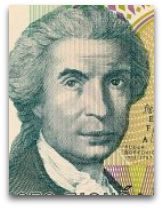 In science, Roger Boscovich (1711-1787) (IQ:185|#88) (Eells 100:44), or "Ruder Boskovic", was a Croatian mathematical physicist, astronomer, philosopher, diplomat, poet, theologian, and general polymath, aka the “Croatian Leibniz” (Heisenberg, c.1930), noted for his 1758 Theory of Natural Philosophy, in which he outlined a stationary point atom theory, viewing atoms a centers of force.

Boscovich atomic theory
In his atomic theory, Boscovich blended Newton’s 1718 atomic theory, i.e. viewing the world as being composed a elementary particles that attract at close distances via the force of chemical affinity, and Gottfried Leibniz’s view of atomic particles as ‘points of energy’, to conceive a newer theory of ‘point atoms’ or ‘stationary atom theory’ in which atoms were regarded as centers of forces without spatial extent, and whereas Newton focused on attraction, Boscovich added to this the importance of repulsive forces, such that at short range, atoms attracted each other, but that at longer range, atoms pushed each other way, the latter aspect explaining gas pressure. [1] In this model, the rigid surface of the Democritus atom model was replaced by a region of equilibrium between the forces of attraction and repulsion associated with the dynamic field surrounding the atom collapsed into a material point. [4]

Influence
The Boscovich stationary atom atomic theory, or some modified version of it seems possibly to have left an impact in the minds of scientists over the next century, and may have been the version of atomic theory held in view in the mind Antoine Lavoisier, when he formulated his 1787 caloric theory, and later possibly held in the mind of Sadi Carnot, when he scripted his 1824 Reflections on the Motive Power of Fire and his concept of re-establishment of equilibrium in the caloric. Some discussions, for instance, do mention Boscovich in discussions of phlogiston theory, the precursor model to caloric theory.

In any event, a version of stationary oscillating atom theory was in the minds of scientists well into the middle of the 19th century. This is evidenced by the fact that in 1856 German physicist August Kronig opened his famous paper “A General Theory of Gases” to the view that atoms to oscillate about positions of equilibrium, but that they have translational motion: [2]

“The molecules of gas do not oscillate about definite positions of equilibrium, but that they move with constant velocity in right lines until they strike against other molecules, or against some surface which is to them impermeable.”

Kronig's paper spurred German physicist Rudolf Clausius into the writing of his 1857 famous paper “On the Nature of the Motion which we call Heat”, which launched the kinetic theory of gases and statistical mechanics, according to his own words independently of Krönig, developed a similar, but much more sophisticated version of the theory which included translational, but also rotational and vibrational molecular motions.

To corroborate the postulate that Carnot may have had a Boscovich atomic view in mind, we note that French engineer Lazare Carnot, founder of the École Polytechnic, Sadi’s father, employed Leibniz’s version of calculus, over that of Isaac Newton’s, making use of Leibniz’s ideas about mechanical energy conservation and possibly his ideas about atoms as ‘points of energy’.

Irish-Scottish physicist William Thomson even took up the ‘inevitable theory of Boscovich’, and sought to show how the grouping of Boscovichian atoms could account for crystalline arrangement and for the phenomena of light. [6]

Nietzsche
In 1865, Friedrich Nietzsche discovered the work of Arthur Schopenhauer and his emphasis on “will” and the concept of “will to live”, and, the following year, through a reading of Friedrich Lange’s 1865 History of Materialism, discovered the work of Roger Boscovich and his Theory of Natural Philosophy, and through these went on to develop a “centers of force” (see: atomic theory) theory of “will to power” as the embodiment of what Nietzsche believed was the main driving force in man. [7]

Quotes | On
The following are quotes on Boscovich:

“Roger Boscovich, published a detailed exposition of the views attacked by Buffon and defended by Alexis Clairaut, and, inspired alike by the opinions of Newton and Leibniz, he conceived a cosmology in which the universe is composed solely of material points, these being attracted to each other in pairs. When these points are separated by a sensible distance, their attraction is reduced to mere universal attraction, whereas when they are in very close proximity it assumes a dominant importance. Boscovich's cosmology provided physical theory with a program which the geometricians of the eighteenth century, and of a great portion of the nineteenth, labored assiduously to carry out. The efforts of Johann Segner (1704-1777), and subsequently of Thomas Young, again drew attention to capillary phenomena, and with the assistance of the hypothesis of molecular attraction, as also of Clairaut's method, Laplace advanced in 1806 and 1807 an admirable theory, which Carl Gauss improved in 1829. Being a thoroughly-convinced partisan of Boscovich's monological doctrine, Laplace communicated his convictions to numerous geometricians, who surrendered to the ascendency of his genius; we shall only mention Claude Navier (1785-1836), Simeon Poisson, and Augustin Cauchy. In developing the consequences of the hypothesis of molecular attraction, Navier, Poisson, and Cauchy succeeded in building up the theory of the equilibrium and small motions of elastic bodies, one of the finest and most fruitful theories of modern physics. The discredit into which the progress of present-day thermodynamics has brought Boscovich's cosmology has, however, affected scarcely anything of what Laplace, Gauss, Navier, Poisson, Cauchy, and many others have deduced from the principles of this cosmology. The theories which they established have always been readily justified with the assistance of new methods, the way of bringing about this justification having been indicated by Cauchy himself and George Green. After Pierre Macquer, many chemists used the hypothesis of molecular attraction in an attempt to disentangle the laws of reaction which they studied, and among these scientists we may mention Torbern Bergman, and above all Claude Berthollet. When the latter published his “Statique chimique" in 1803, he believed that the science of chemical equilibria, subject at last to Newton's method, had found its true direction; however, it was not to enter upon this direction until much later on, when it would be guided by precepts altogether different and which were to be formulated by thermodynamics.”

“Boscovich is one of the great intellectual figures of all ages.”