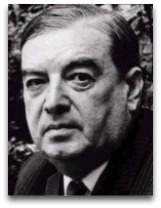 In hmolscience, Roger Caillois (1913-1978) (CR=17) was a French sociologist, anthropologist, and philosopher noted, in human thermodynamics, for his mid-1930s second law of thermodynamics explanation of aberrant sexual behaviors, specifically the female mantis eating its mate during copulation, and social mimesis, specifically the rise of copying behaviors resulting in equilibrium uniformity and the rise of the noonday demon, and for his 1973 supposition that both Darwin and Clausius cannot be right.

Darwin | Clausius
In 1973, Caillois, on the seeming incompatibility between thermodynamics and evolution, famously stated: [1]

“Can Carnot and Darwin both be right?”


Prigogine seemed to use this statement as an argument to the effect that equilibrium thermodynamics predictions described by Boltzmann’s idea of the complexions P of the arrangement of the particles of a system as moving towards ever increasing states of disorder, as dictated by the second law, was not a tool or model that could be used to describe biological evolution, in the sense that the “extremely improbable” states associated with the growing complexity of biological evolution was something to be regarded as miracles, from the perspective of equilibrium thermodynamics. He goes on to conclude, after some argument, that: [10]

“Equilibrium thermodynamics provides a satisfactory explanation for a vast number of physiochemical phenomena. Yet it may be asked whether the concept of equilibrium structures encompasses the different structures we encounter in nature. Obviously the answer is no.”

Prigogine, oddly enough, is wrong in this statement. What is more ironic, he goes on to cite Caillois as justification for this view, whereas in fact Caillois argued the opposite to what Prigogine states above, specifically that there do exist approaches to states of equilibrium in social and sexual interactions, as typified by biological mimicry and uniformity of the masses, and annihilations during sexual encounters.

Myth and the man
Caillois seems to have begun using thermodynamic arguments in theorizing, sociologically, about sex in biology and in the loss of psychic energy in certain human activities, in the mid 1930s. In particular, several years prior to 1937, the year he formed a famous think tank known as the College of Sociology, he was inspired by the topic of mimesis to write, what are considered, his two most memorable articles (both of which are included in his the Myth and the Man), the first having its point of departure in the sexual habits of the praying mantis, wherein famously the female devours her mate during intercourse; the second compares certain forms of animal mimesis, notably among insects, to what Caillois calls legendary psychasthenia (coined by Pierre Janet), which is French psychiatric term referring to the pathological lowering of psychic energy, a sort of subjective detumescence, a loss of egoistic substance, a depressive exhaustion resembling acedia. [3]

Caillois, in his essays, supposedly elevates this model of psychasthenia to that of a universal principle and makes it the heart of his study of ‘noontide demons’ and his subsequent work on mimesis, whereby the notion “allows him to describe and interpret mimesis according to a thermodynamic model.” [4] The view employed by Caillois, supposedly, is that according to Carnot’s first principle, every production process presupposes an initial hierarch, a primary distinction, an original inequality, a difference between high and low or between a cold source and hot source. Caillois thus put this version of the second law to work in his articles on the praying mantis and on mimesis, on the logic that the entropy of a given system cannot decline. [5] The view he presented, supposedly, is that, psychasthenia is the lowering of psychological or mental energy, meaning that in sexual interactions and in mimetic-behavior resulting sociological interactions, the initial gap diminishes, the power source heats up, production diminishes. The vital distinctions wither. Both the praying mantis, by assimilating her mate, and mimetic insects, by ceasing to distinguish themselves from their surroundings, illustrate this moment in which beings no longer have the energy to establish difference. [6]

Beyond these examples, Caillois may have even more human thermodynamics theories buried in his works. He describes his College of Sociology, for instance, as a “condenser of energies”, as a reaction against fatalism. [5] In his thermodynamics-based view, the temptation of the abyss, indicative of the presence of the noonday demon, may be universal, experienced by everyone; nevertheless, not everyone need succumb. [5]

Thermodynamics of mimesis
In his discussions on biological mimesis, wherein insects copy each other’s behavior until a state of uniformity results, he seems to point toward the interactions between an organism (system) and its surroundings, arguing that mimesis stems from the fact that, by submitting to it, an organism renounced that distinction; it abdicates the difference, the vital difference, between life and matter, between organic and the inorganic; and that on the model of Marie Bichat, who defines life as the set of forces that resist death, mimesis is life ceasing to resist. On this view, Caillois comments: [7]

“We touch on the fundamental law of the universe brought to light by Carnot’s principle: the world tends towards uniformity.”

Caillois’ characterization of mimesis, as based on, it would seem, equilibration in systems due to the actions of the second law, according to the views of American professors of French literature Denis Hollier and Catherine Porter, “constitute a moral allegory offering a background against which the true scope of the project for the College becomes clear.” [8] Like the male praying mantis, like those insects that turn themselves into branches, the cleric too gives up self-possession, but his renunciation takes on new meaning; instead of accelerating the general tendency toward entropy, the cleric’s self-abnegation reverses it, thereby producing effects of negative entropy, or to use the term Caillois introduced in La Dissymetrie, inverse entropy. [9]