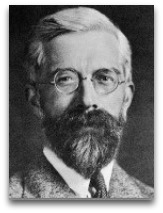 In existographies, Ronald Fisher (1890-1962) (IQ:#|#) (RGM:859|1,500+) (James 38:29) (CR:9) was an English statistical evolutionary biologist noted, in evolution thermodynamics, for his 1933 theory that "fitness", as described via Darwin's natural selection theory, has something to do with entropy and entropy increase; also known, supposedly, for the “sexy son hypothesis” (Ѻ).

Overview
In 1930, Fisher, in his The Genetical Theory of Natural Selection, presented the following view: [1]

On this basis, he postulated that the second law of thermodynamics, in the form of “entropy tends to increase”, and his fundamental theorem of natural selection, in the form of “the rate of increase of fitness of any organism at any time is equal to its genetic variance in fitness at that time”, may ultimately be subsumed under a more general principle or law. [1] In short, Fisher argues that there is a connection or analogy between the increase in fitness, as described by his fundamental theorem of natural selection, and increase in entropy, as described by the second fundamental theorem of thermodynamics. [3]

Influence
American ecological engineer Robert Ulanowicz claims that Fisher was "captivated by the elegant statistics that James Maxwell and Ludwig Boltzmann had used in creating statistical mechanics." [4] This claim, however, needs a (fact check) as some Ulanowicz's references are statements are dubious, e.g. his claim that Charles Darwin's "professed ambition" and "desire" was to become the "Newton of a blade of grass". [5] This last example, to clarify, is a mis-attribution of the famous 1790 supposition by German philosopher Immanuel Kant, from his Critique of Judgment, that there would never be a Newton of a blade of grass, on the argument that living things, he believed, are examples of “natural purposes”, entities organized so purposefully that we cannot explain them altogether through the blind causality we apply to inanimate nature. [6] Or, as Arthur Schopenhauer says, in his The World as Will and Representation (1818): “Kant is right when he says that it is absurd to hope for the Newton of a blade of grass, in other words, for the man who would reduce the blade of grass to the phenomena of physical and chemical forces, of which it would be a chance concentration, and so a mere freak of nature.” [7]

Entropy-Fitness correlations
In 1928, British astronomer Arthur Eddington published his lay-science themed book The Nature of the Physical World, filled with many now-famous quotations, in which he remarked that “the law that entropy always increases—the second law of thermodynamics—holds, I think, the supreme law position among the laws of nature”. [2] On this basis, Fisher states “is it not a little instructive that so similar a law should hold the supreme position among the biological sciences.” He continues “while it is possible that both may ultimately be absorbed by some more general principle, for the present we should note that the laws as they stand present profound differences.” These differences, in the Fisher’s novice-thermodynamics point of view, are stated below (with modern corrections listed below each statement):

(a) The system’s considered in thermodynamics are permanent; species on the contrary are liable to extinction, although biological improvement must be expected to occur up to the end of their existence.

The correction, as American mathematical physicist Willard Gibbs showed in 1876, is that chemical thermodynamic systems are not “permanent”, but will evolve to equilibrium, and can be defined as dynamic systems, with the inflow and outflow of chemical species, as quantified by changes in the chemical potential of the system.

(b) Fitness, although measured by a uniform method, is qualitatively different for every organism, whereas entropy, like temperature, is taken to have the same meaning for all physical systems.

A number of corrections remain in this statement, aside from the modern thermodynamic interpretation of “fitness”. For one, entropy is not “like temperature”. Secondly, the qualitative meaning of entropy does, in some cases, take on different meanings for different physical systems. Austrian physicist Ludwig Boltzmann, for instance, showed entropy to be statistically correlative to “disorder” in gas phase systems; whereas this correlation does not hold in all systems.

(c) Fitness may be increased or decreased by changes in the environment, without reacting quantitatively upon that environment.
(d) Entropy changes are exceptional in the physical world in being irreversible, while irreversible evolutionary changes form no exception among biological phenomena.

This latter statement is incorrect on both counts. Firstly, “entropy changes” themselves are not irreversible; it is the measure of entropy change in a cycle that is meant to quantify irreversibility in heat driven systems. Secondly, all processes in nature are irreversible.

(e) Entropy changes lead to a progressive disorganization of the physical world, at least from the human standpoint of the utilization of energy, while evolutionary changes are generally recognized as producing progressively higher organization in the organic world.

This last point of Fisher is an incorrect extrapolation of the Boltzmann chaos assumption, i.e. that traveling particles have non-correlative velocities, to the entire natural world.

Education
In 1912, Fisher graduated in mathematics and physics from Cambridge University.